From Buonconvento to Asciano

From Siena we take the Francigena road, an important route for pilgrims but also an artery for trade, artistic and cultural exchanges, a road that starts from Santiago de Compostela and pass through Rome and Brindisi, port for Holy Land. The Francigena road is surrounded by rolling hills. 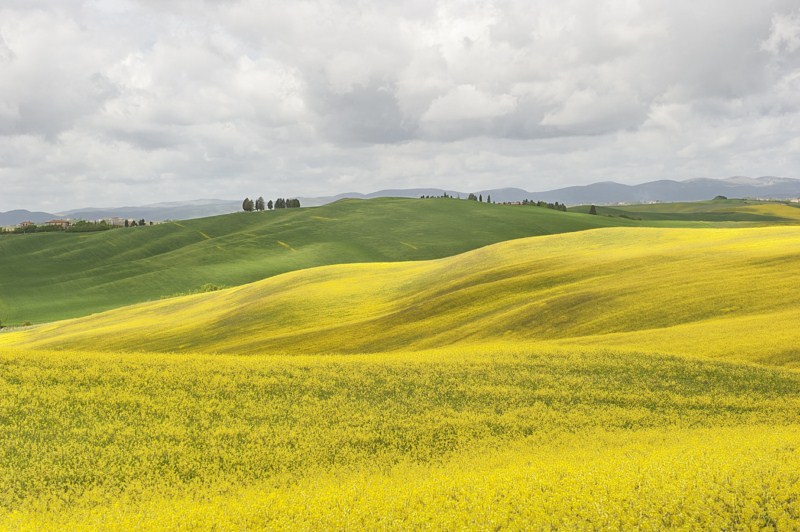 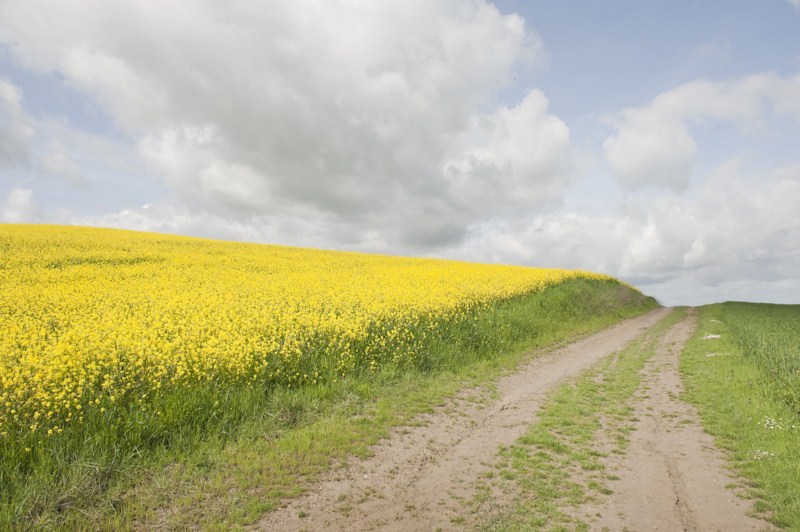 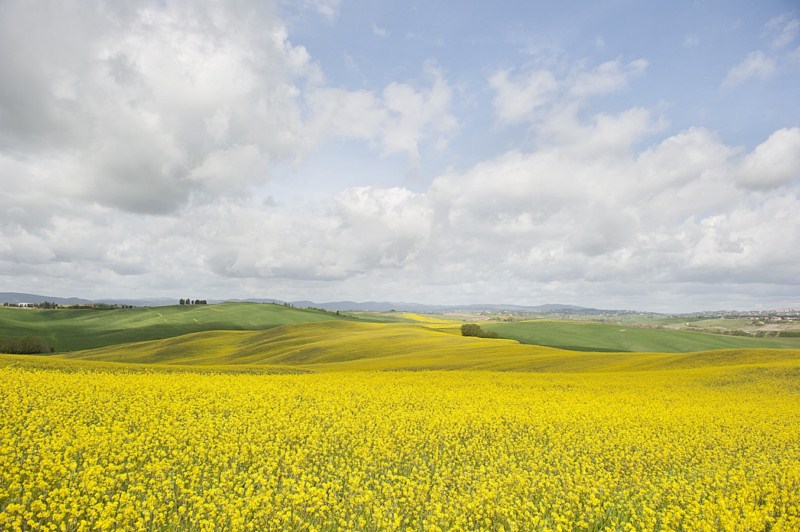 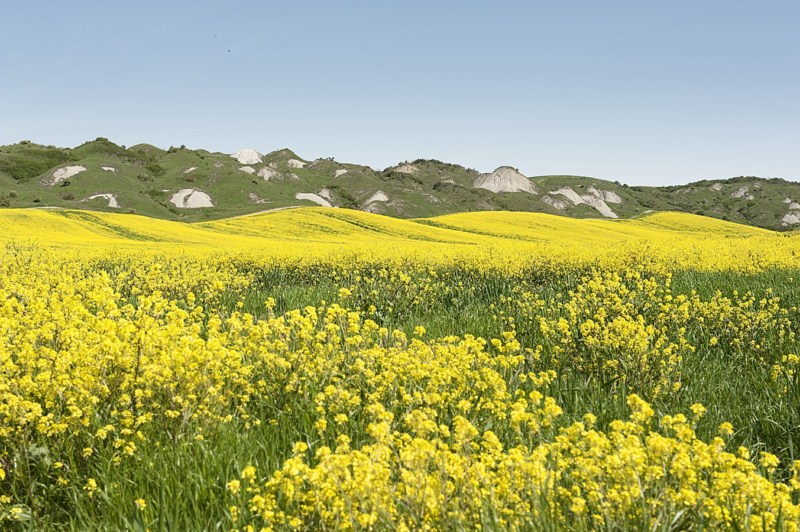 Leaving this landscape behind we arrive in Buonconvento. 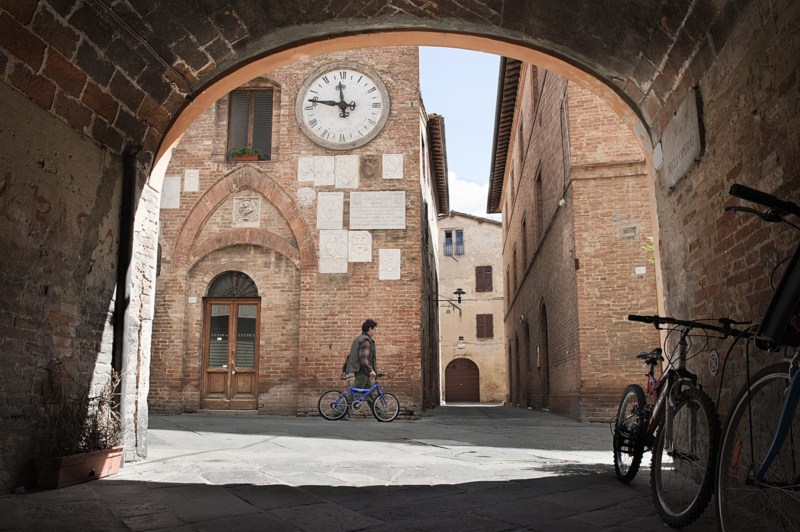 Buonconvento is a nice Medieval village that gives beautiful memories to all the travellers, thanks to the good Tuscan cold cuts, wine at cheap prices and the cosy mood.

Palazzo Ravizza suggest you to taste the Trattoria Da Mario, that features the typical Tuscan cuisine, ideal for a relaxing stop at the central street of the town. 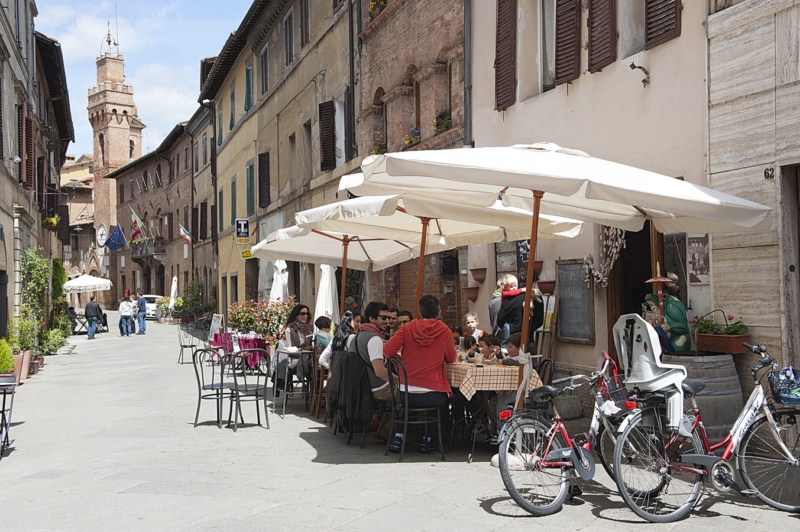 The small museum of sharecropping deserves a brief visit. It’s a full immersion into countryside and into the Italian society of the past, among objects, machineries, sounds and traditions of Tuscan farmer life. 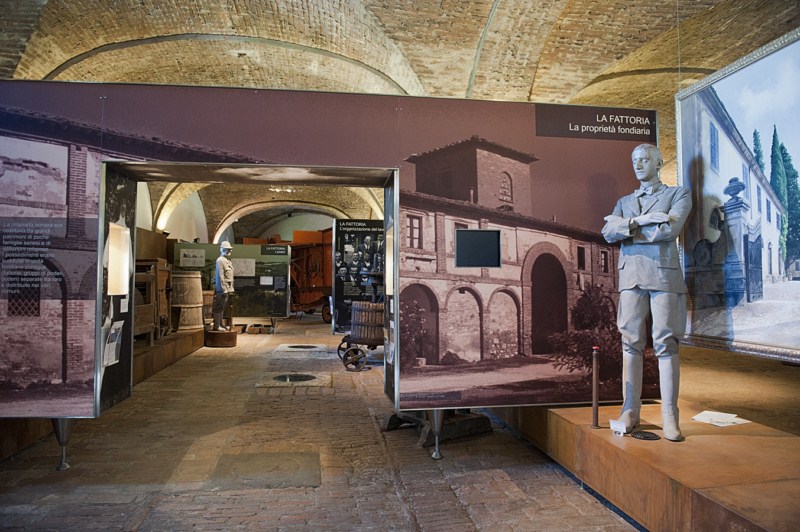 When you finished the visit, you can take the street towards the Abbey of Monte Oliveto Maggiore. 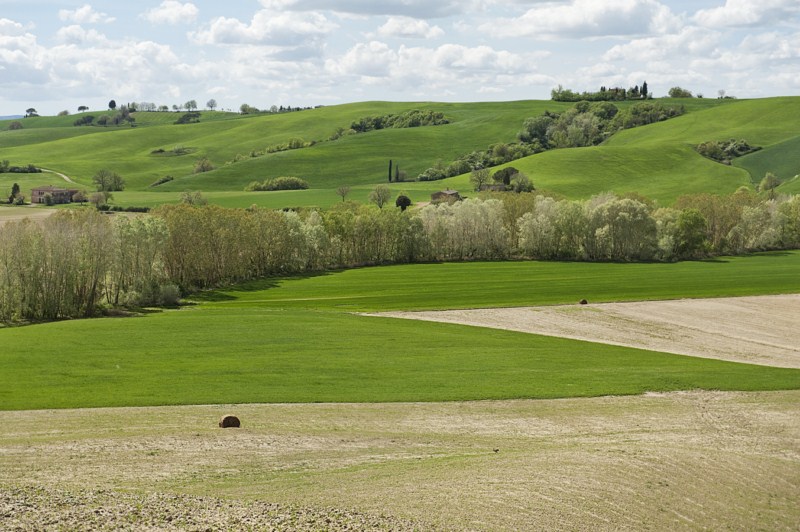 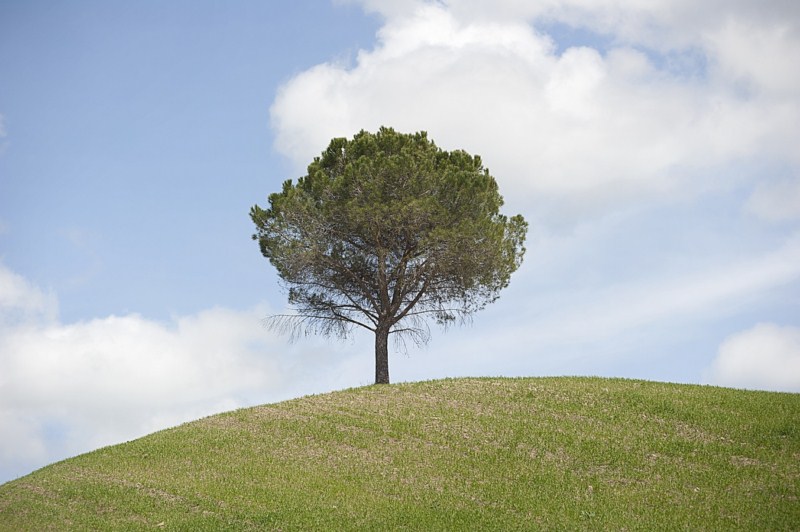 The landscape is one of the most enchanting and special of Tuscany, here the traveller is surrounded by white hills and creeks called Crete. 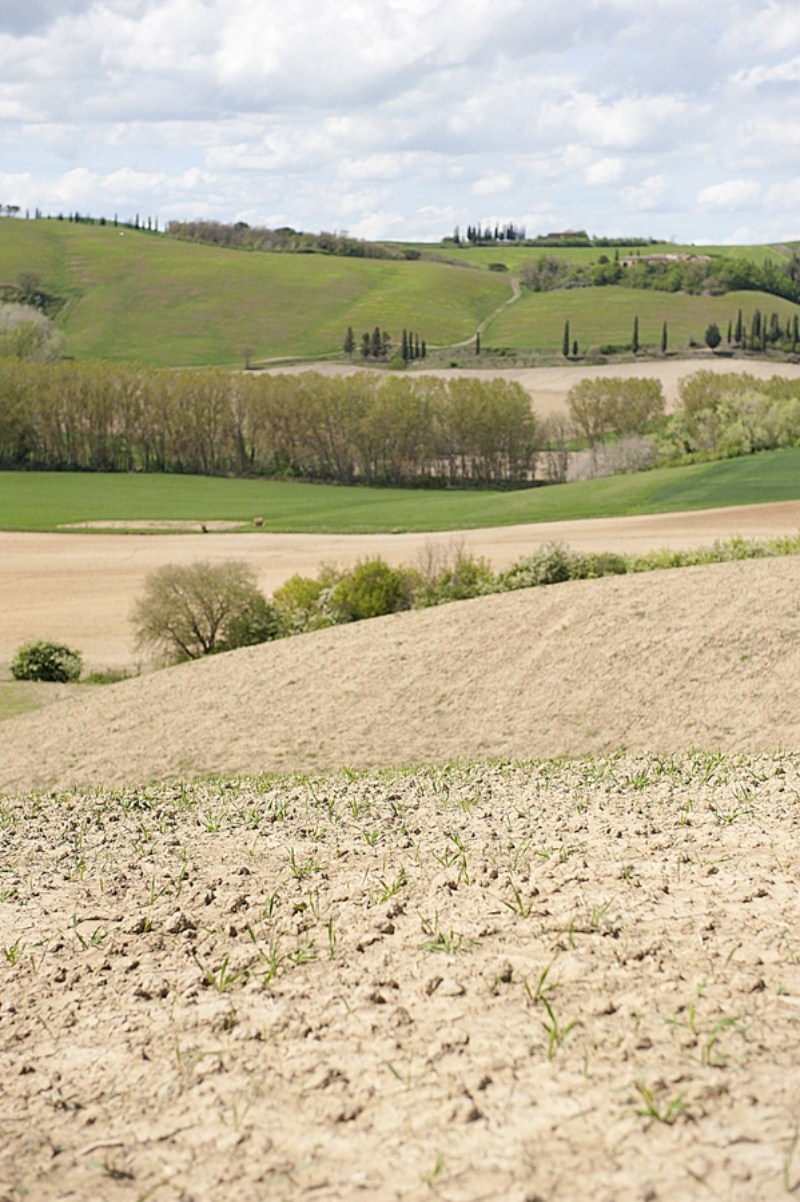 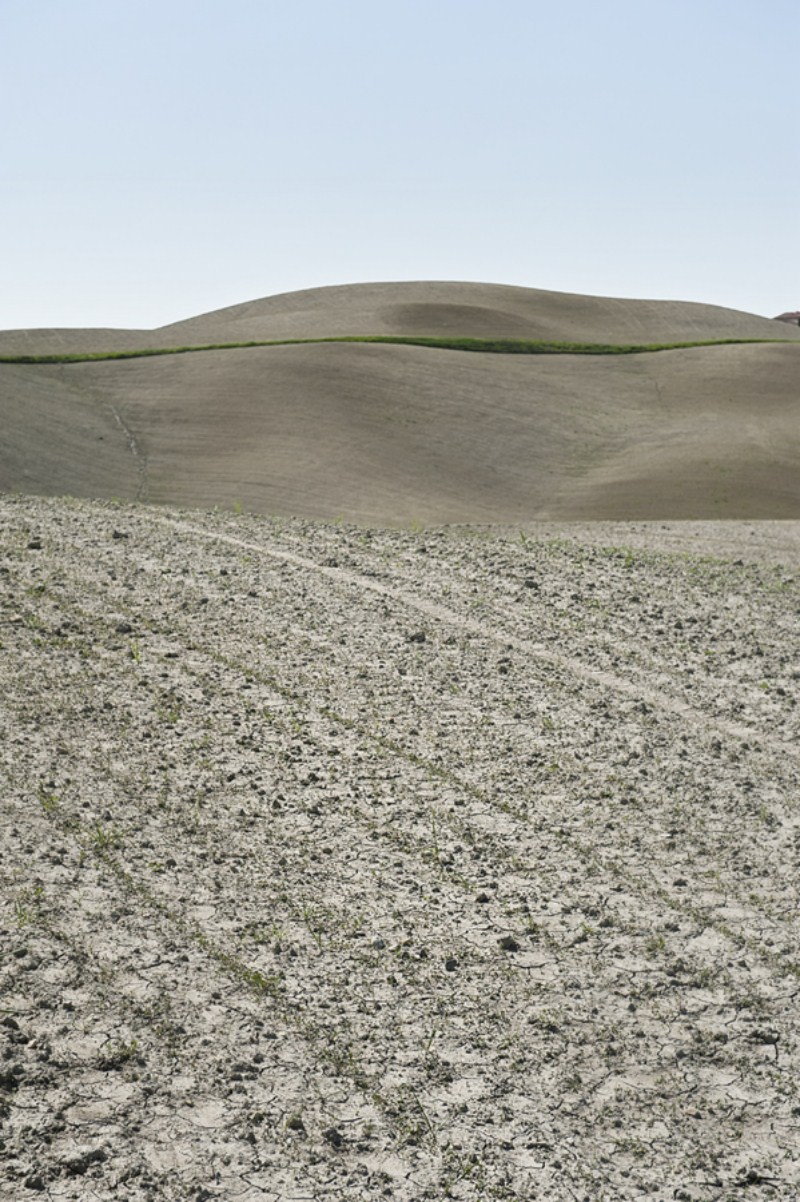 Suddenly, in the milky landscape, almost lunar, we see an oasis of green cypresses; we arrive to the Abbey of Monte Oliveto, founded in 1313 by the Professor of Law at University of Siena, Bernardo Tolomei, who when was 40, retired to monastic life to the lands that were property of his wehy family, called “Accona desert”. 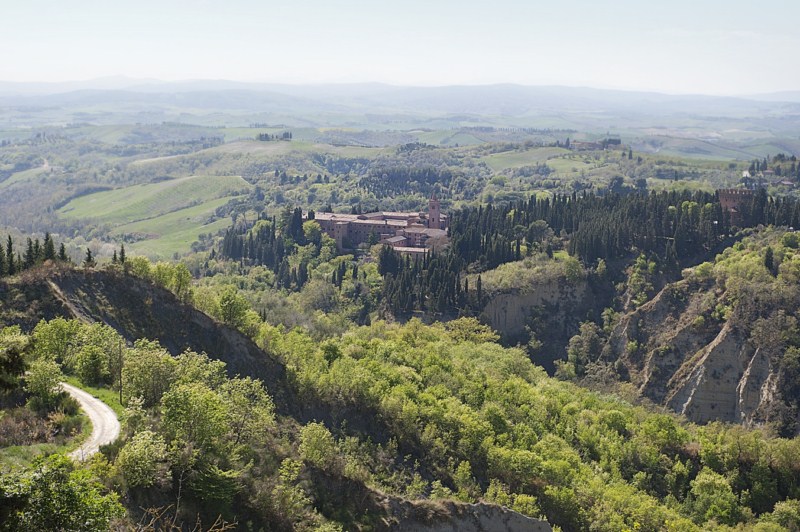 Here, at the end of XIX century, came Isabelle Stewart Gardner looking for relax and Senese paintings to buy for her museum-home in Boston, along with her dressed up artistic advisor, Bernard Berenson. 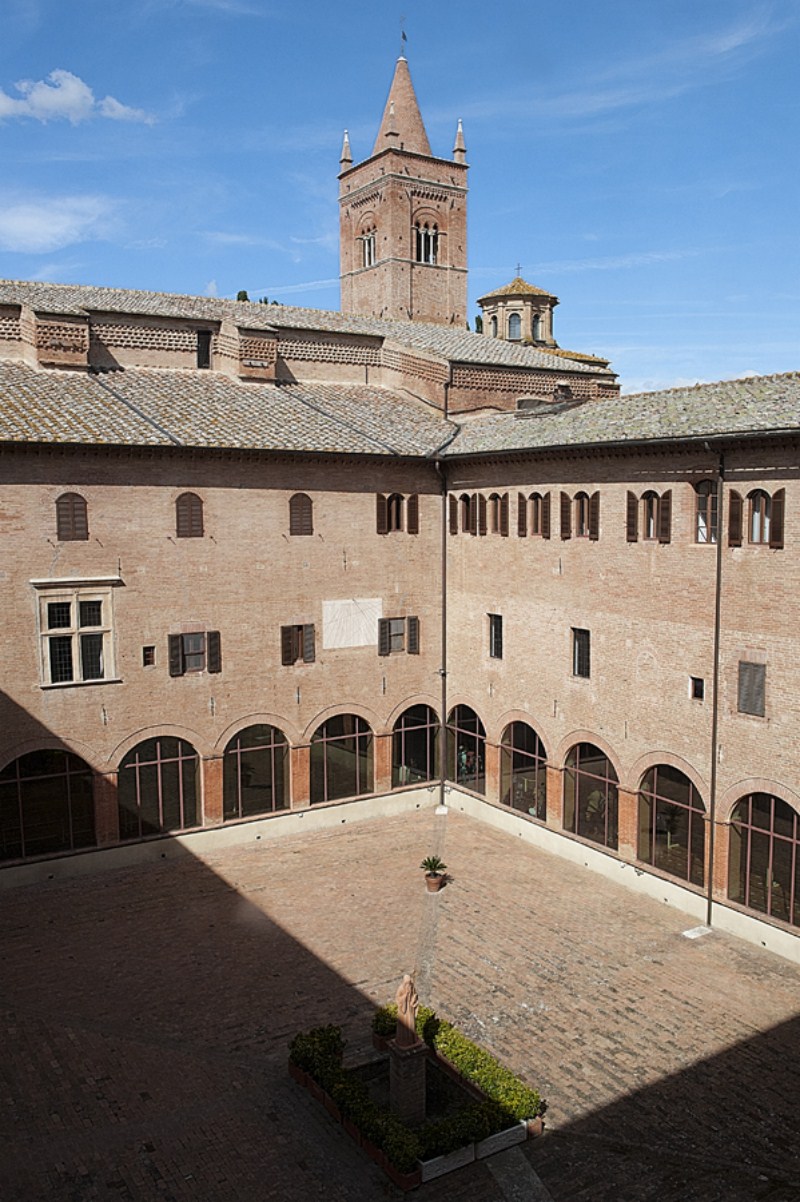 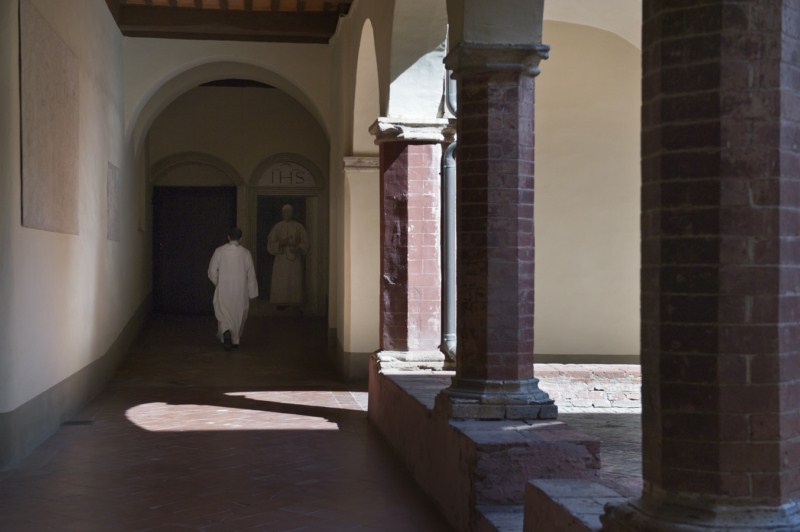 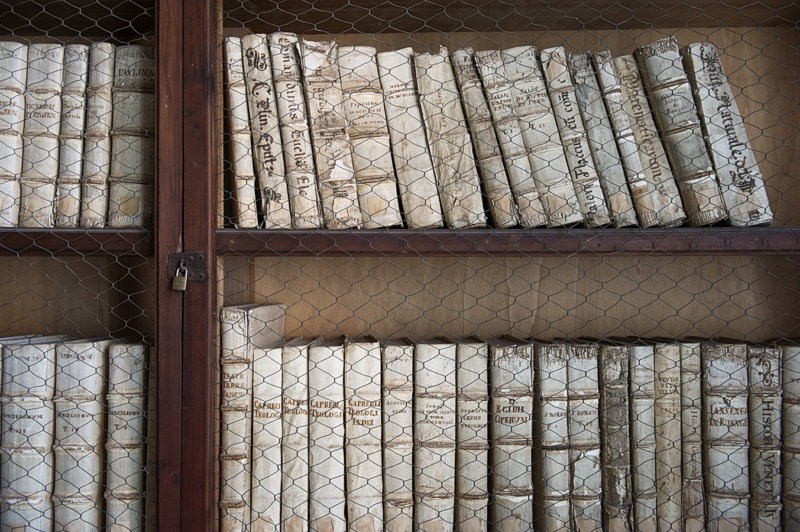 During the same years, the refined Paul Bourget remembers, in his book “Sensations d’Italie” in 1891, his visit at the cloister of the abbey:”I don’t know how much time I need to get used to, but, from the morning and before to start writing,seeing above the door some fragments of a Sodoma’s fresco discovered under the white plaster is, for a lover of religious painting, a so wonderful sensation that is possible to forget twenty little miseries of uncomfortableness?”. 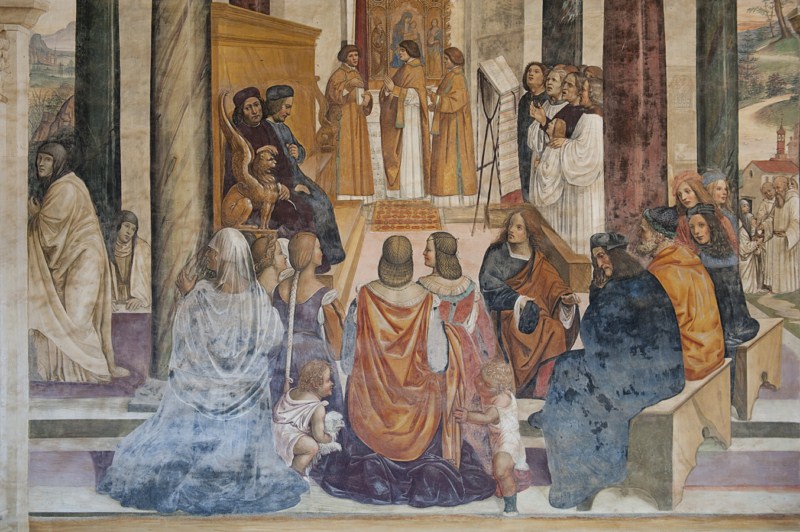 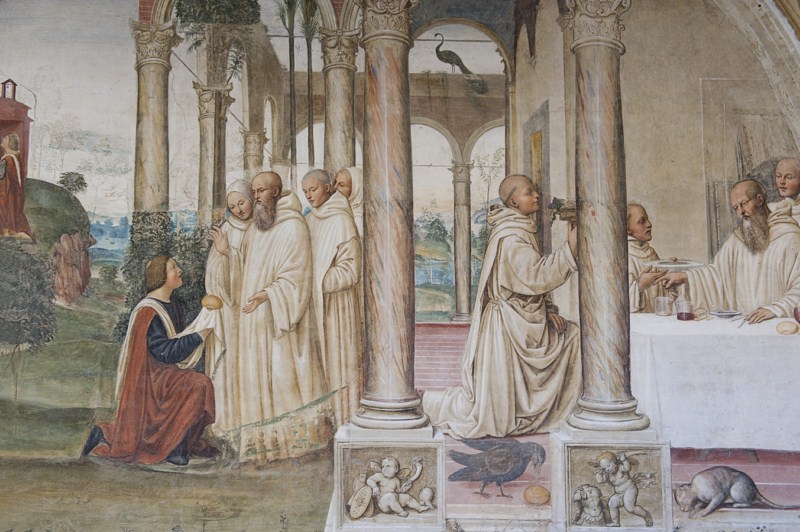 Paul Bourget continues: “When the moment of lunch is come, another old painting overlooks the great table set at the refectory of novices that now is the dining hall for travellers”. 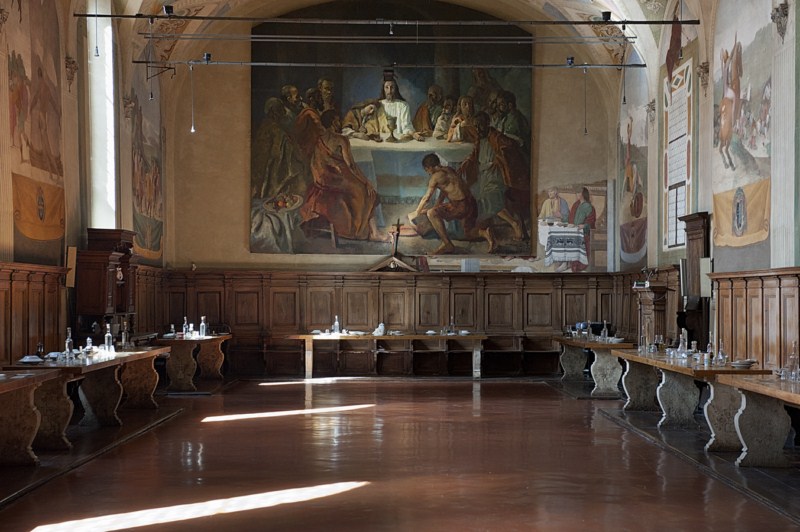 “What an incomparable place is this cloister, enclosed by a stained glass window, where the Sodoma realized others twentysix frescoes and Luca Signorelli did eight! Both represented many monks, using as text the episodes of this legend of San Benedetto, that combines the memories of the late Latin decadance and those of the barbarians.

Sodoma lived here for a long time, and is proud of all this sort of malices, as to give the face of the friars that he bears to the hereticals and the damned, or self-portrait himself as Knight of Ma, surrounded by hedgehogs and guinea pigs, his favorite animals.
Signorelli, on the contrary, saw and copied the religious farmers that wear clogs, dig the ground, built walls”. 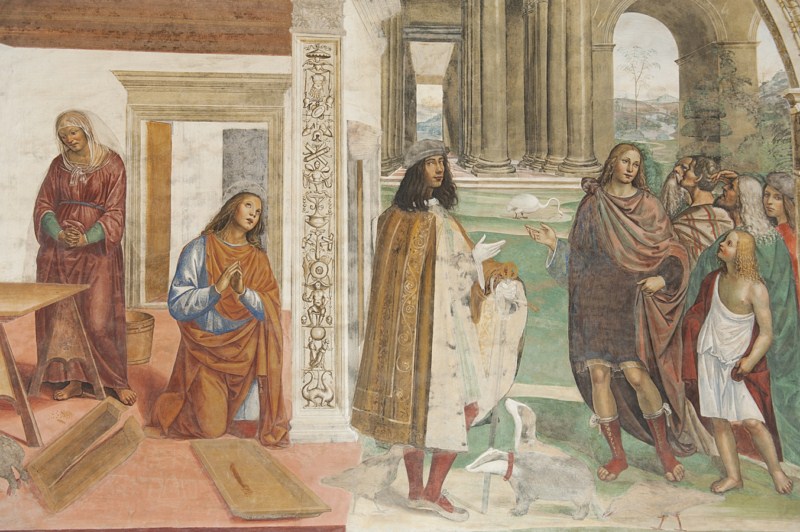 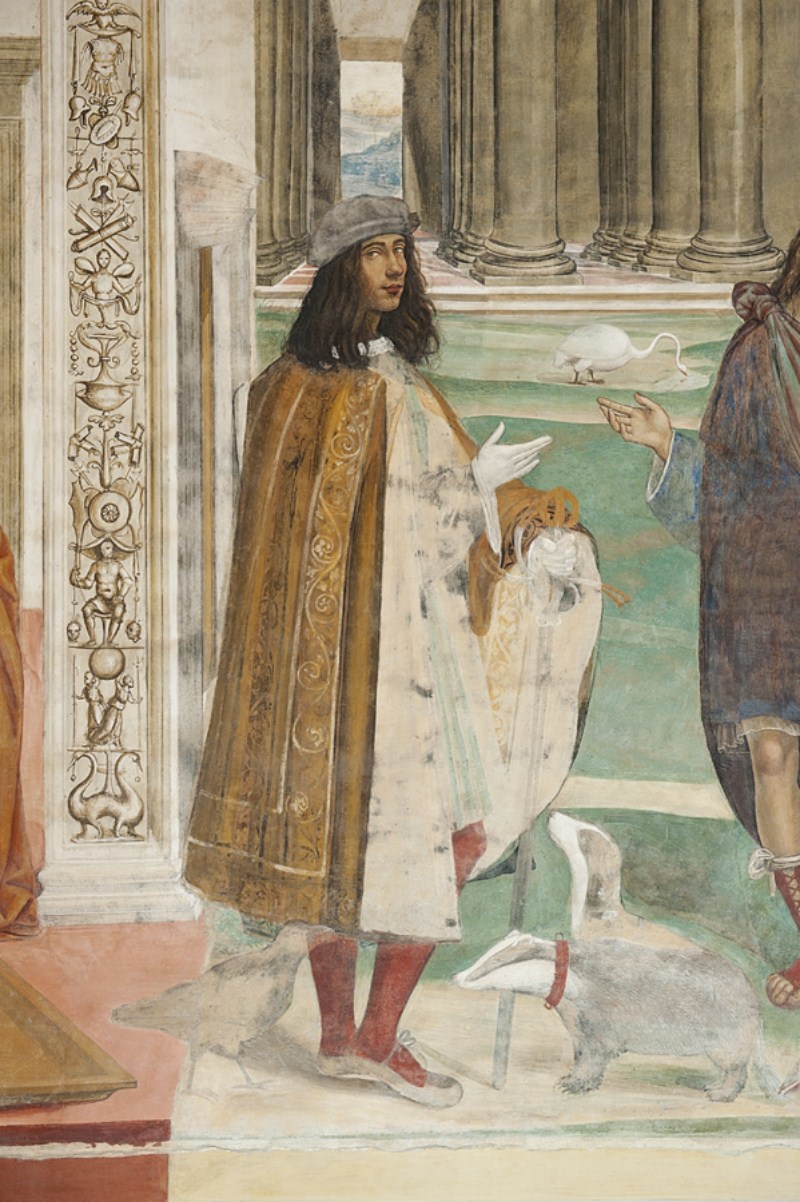 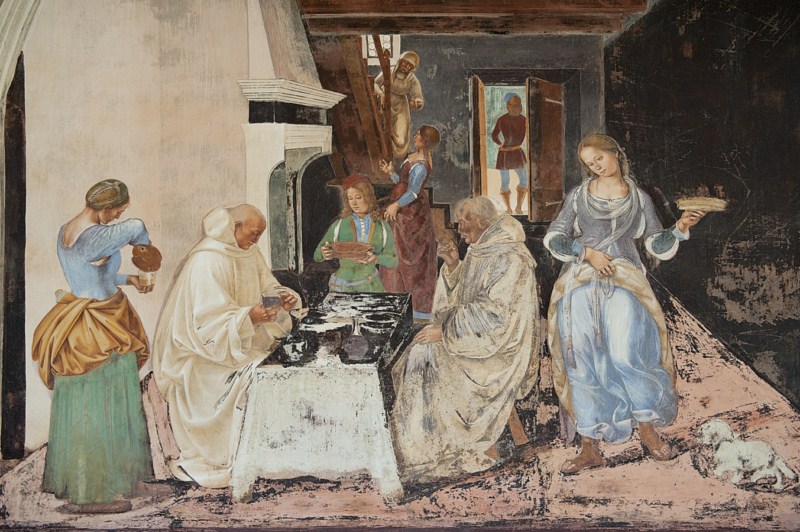 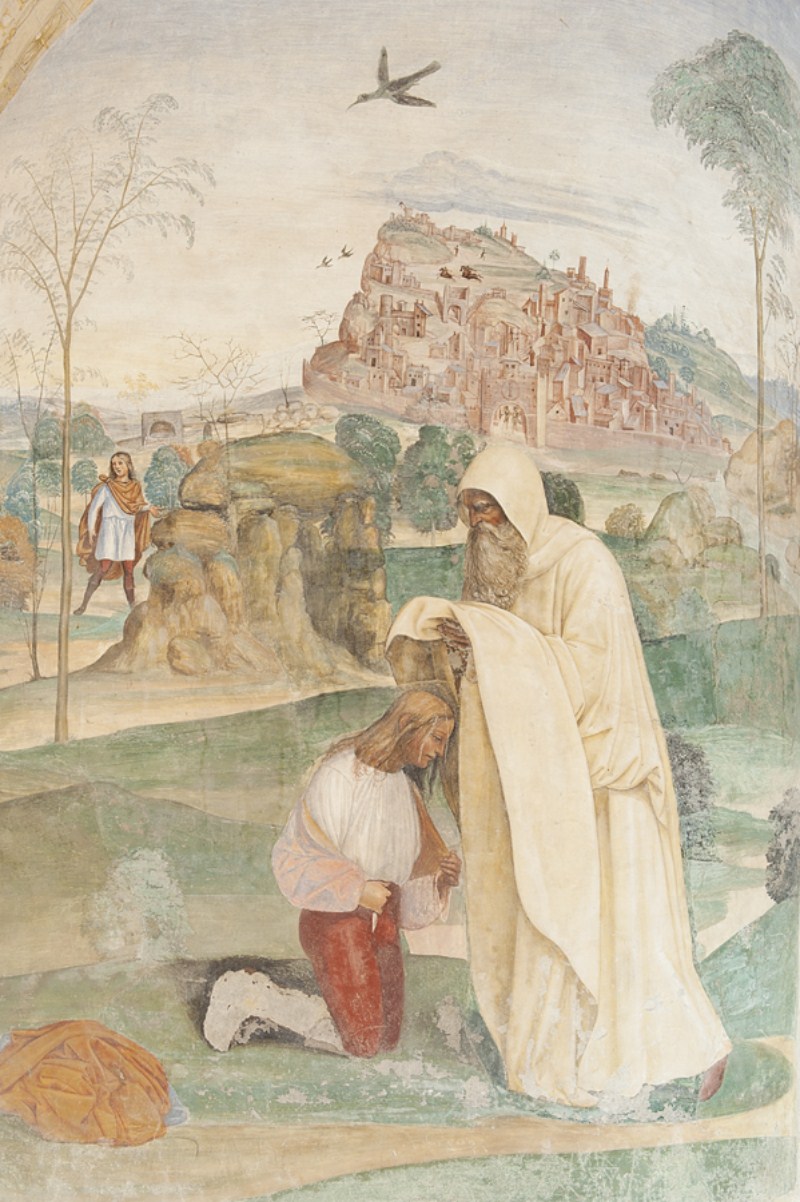 After the visit at the Abbey, the travel can continues through the Crete Senesi, towards the small village of Asciano. 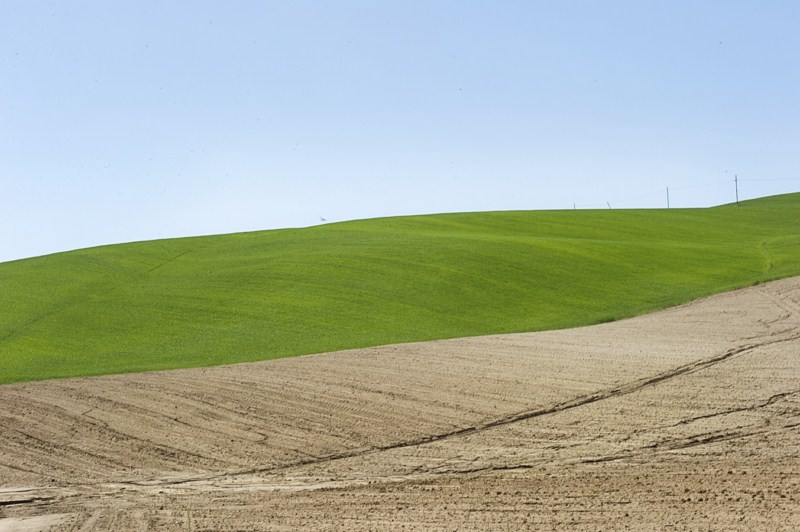 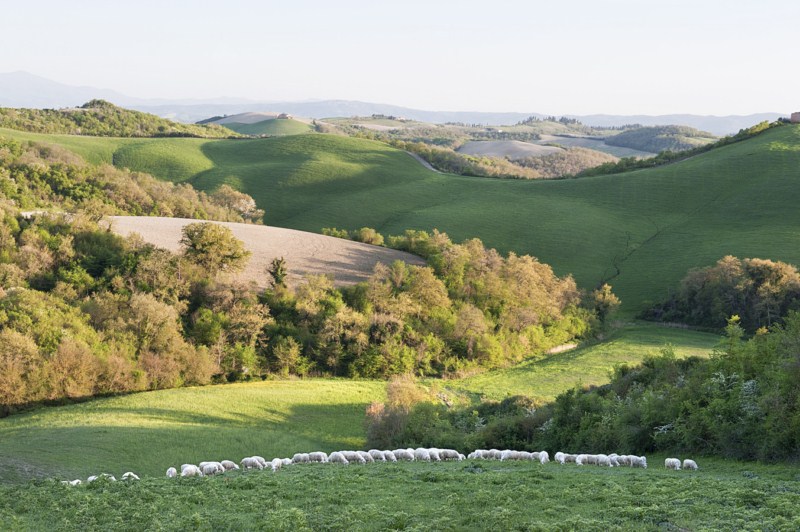 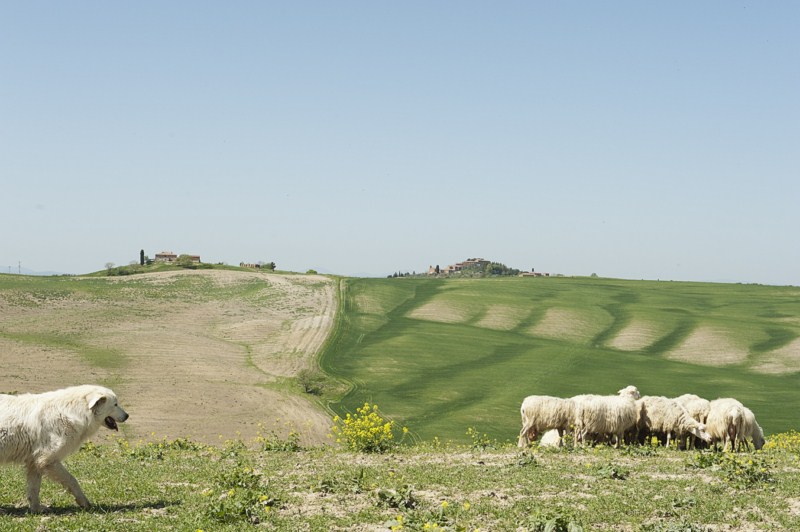 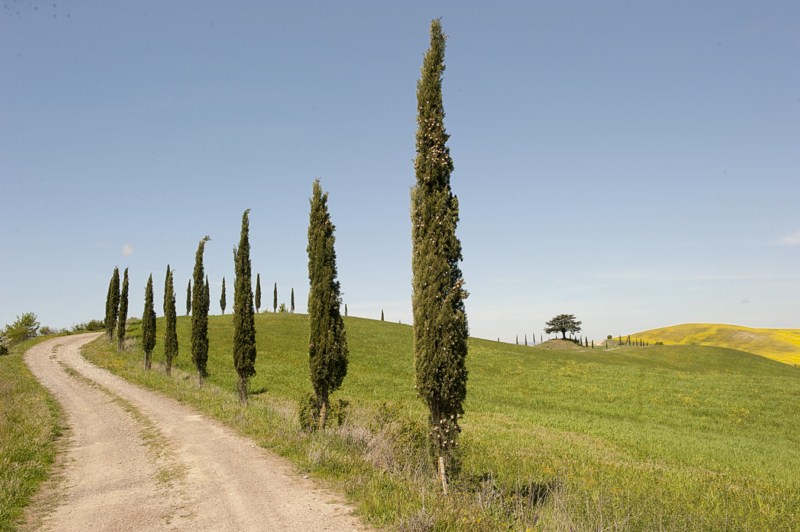 Since the Roman Age, Asciano is full of ceramic factories, and now you can find at small shops the simple earthenware products typical of Tuscany. 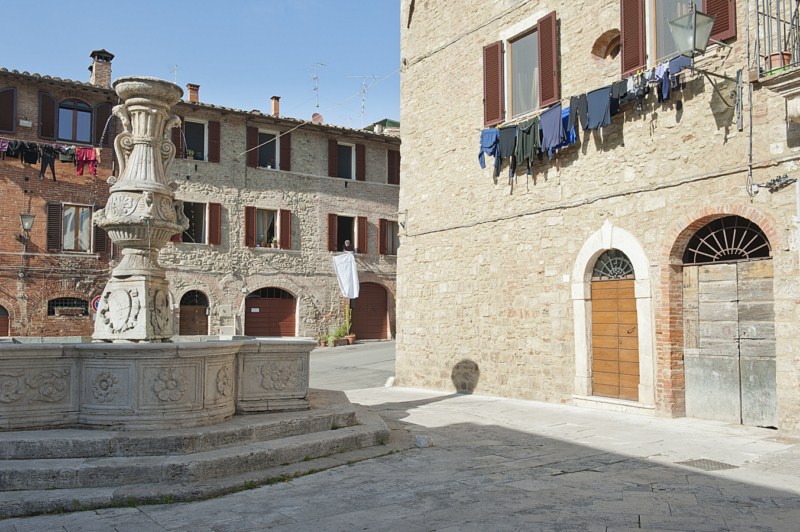 If you want to discover the amazing landscape around Asciano you can take a dirt road that starts from the cemetery of the village. 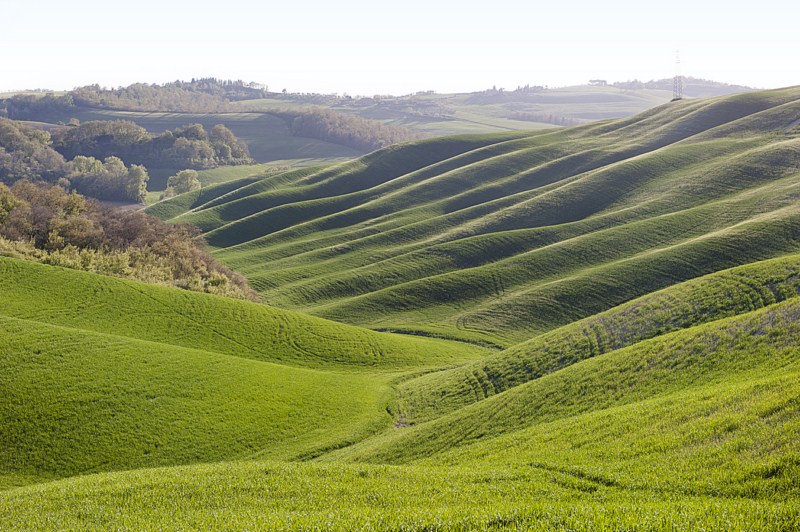 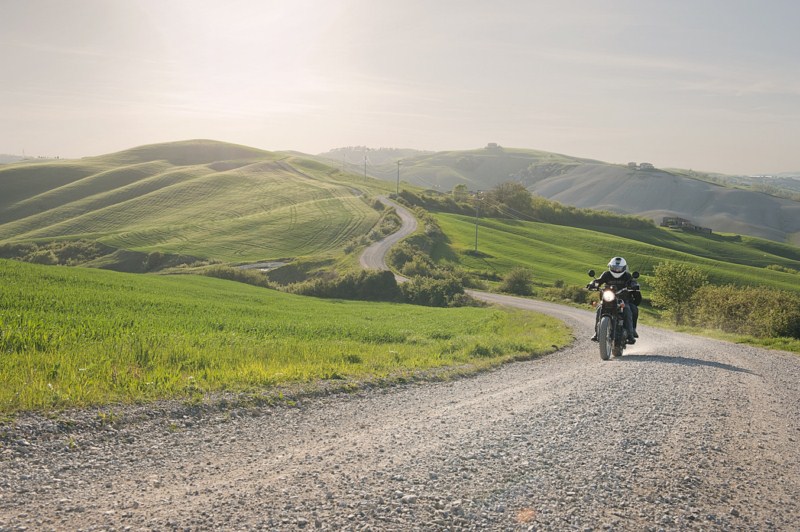 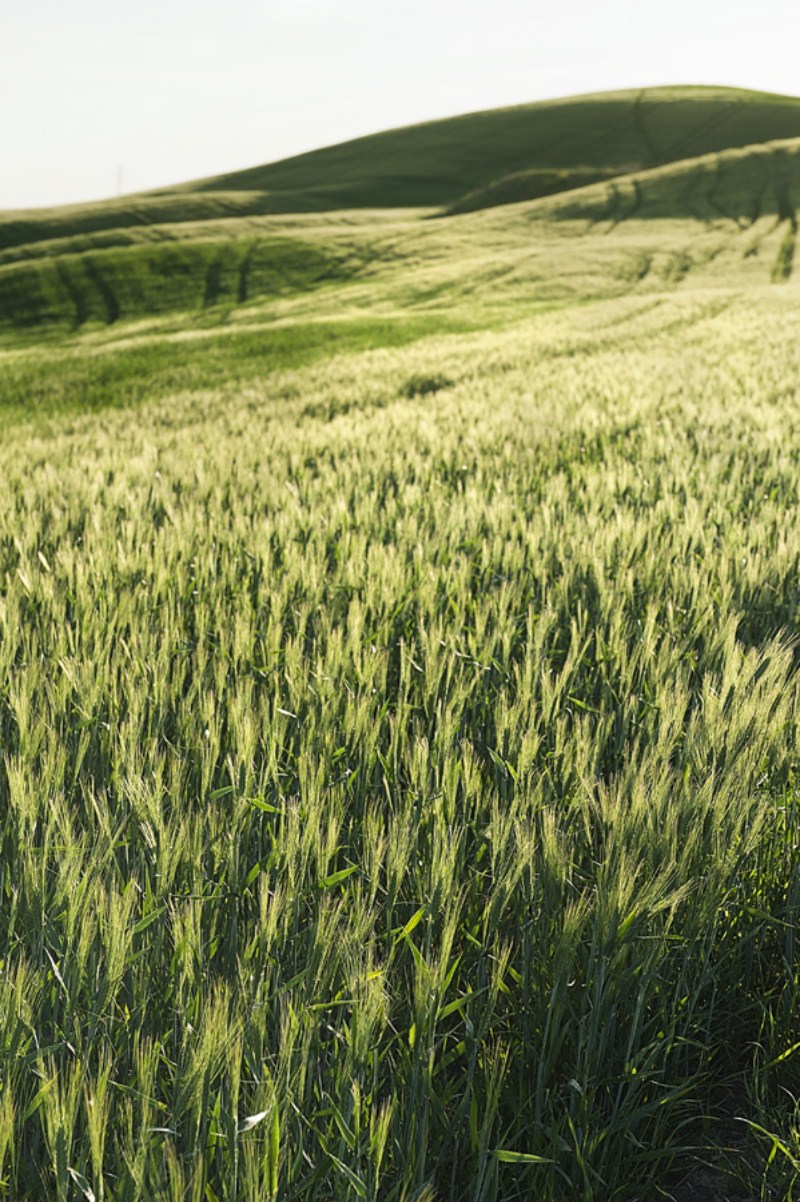