The Palio di Siena: origins and anecdotes about Contrada of the She-Wolf

There isn’t another city where you will find a competition so vibrant as the Palio di Siena, an event of which is inevitable to discuss and it is useful to know more if you are not Sienese.

Our 17 Contrade tour continues with the Lupa (She-Wolf), the only Contrada twin with the city of Rome and the last to win the Palio, both in July and August 2016.

When a Contrada wins two Palios in a row, we say that it did “cappotto“ (coat): with the victory of August 16th 2016, a date corresponding to the patron saint of the Contrada, San Rocco, the Lupa has won a total of 36 victories.

We start from the origins: the Lupa is a part of the Terzo di Camollia and includes the areas of Pian d’Ovile, via Fontenuova, piazza del Sale, a part of Via di Vallerozzi and a part of Piazza Salimbeni, just to name a few.
The baptismal fountain of the Contrada was made by the architect Giovanni Barsacchi, and is characterized by a bronze she-wolf, realized by Emilio Montagnani in 1962.

Regarding the She-Wolf, it should be remembered that this is also a symbol of the city of Siena, as we have explained in the article Siena coat of arms and symbols

This connection with Rome is explicit both by the symbol of the Contrada and by the name of his official journal, Romolo and Remo, tribute to the ancient origins of Siena and testimony to the importance of traditions for its inhabitants. 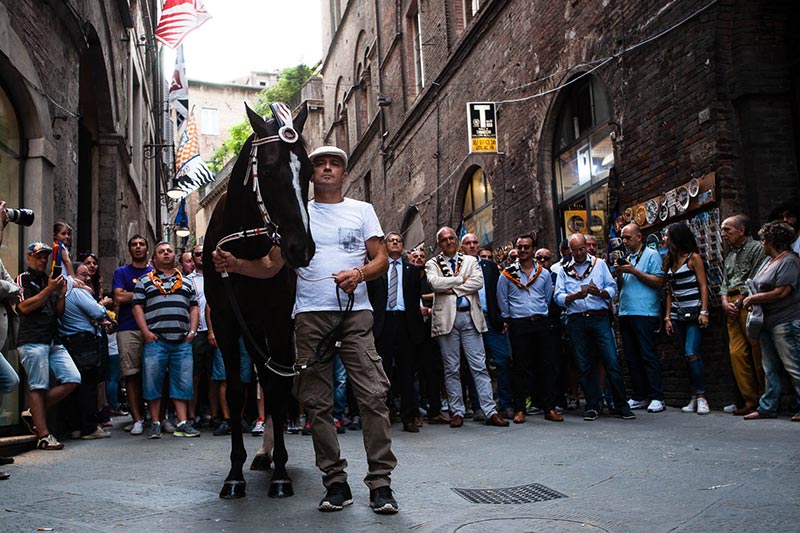 This connection with Rome is explicit both by the symbol of the Contrada and by the name of his official journal, Romolo and Remo, tribute to the ancient origins of Siena and testimony to the importance of traditions for its inhabitants.

To visit the Contrada della Lupa, we recommend to go to the Oratory of St. Rocco Confessore, built in the XVI century, and to the museum of the Contrada that stands beside the oratory in Via di Vallerozzi; the Contrada office is open to the public every afternoon from 5:30 pm, however we recommend to check the official website to keep up-to-date on the opening hours: www.contradadellalupa.it

What makes Lupa’s victory so special last year? First of all, the Lupa was the “granddaughter” (“nonna” in Italian) until then, because she had not won since 1989; it was also since 1933 that a Contrada didn’t win two Palios in a row with the same jockey and the same horse, in this case Jonathan Bartoletti (nicknamed Scompiglio) and Preziosa Penelope.
This was the 17th “cappotto” in the history of the Palio, a rare event that makes subsequent parties even more engaging. 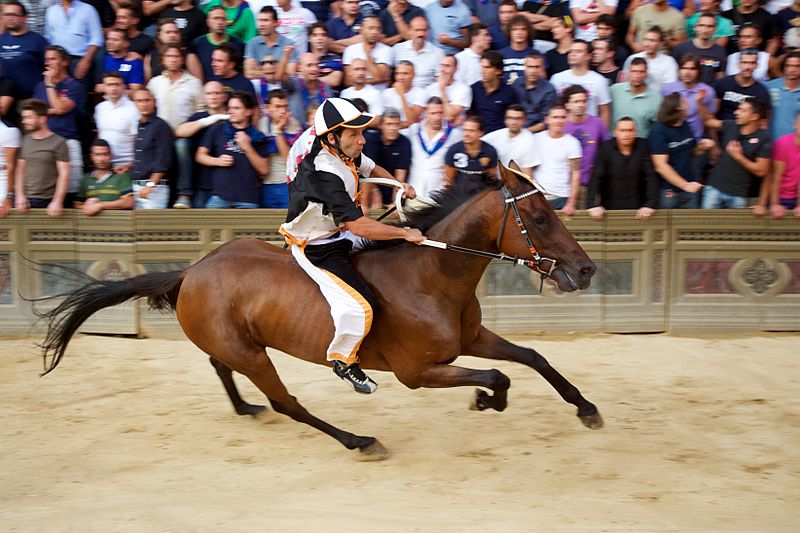 About the upcoming Palio, which will take place on July 2nd, the competing Contrada will be Pantera, Onda, Leocorno, Torre, Civetta and Selva (in the order of entry at Piazza del Campo). We have to wait until Sunday 28th May to find out which Contrada will be picked up by lot, since at each Palio runs 10 Contrade.