What to see in Piazza Tolomei in Siena

Walking through Siena is, without any doubt, the best way to explore and fell in love with the city, not only by visiting the most famous places but also the squares, alleys, streets and sights that make the historic center out of ordinary, not surprisingly one of the most appreciated all over the world.

Among the lesser known places by tourists, there is Piazza Tolomei, which takes its name from a family who had great importance in Siena, the Tolomei, they were the bankers and merchants who in the XI and XII centuries owned vast estates.

Palazzo Tolomei left as evidence of that period, a noble stone building that is the oldest private residence in Siena, already existing in 1205 but rebuilt after 1267.

The history of Palazzo Tolomei 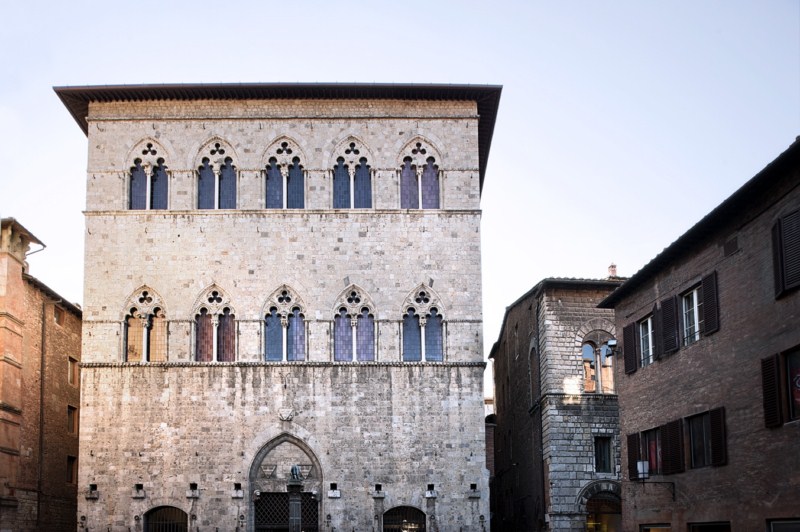 The reconstruction of the palace took place following the exile imposed on the Tolomei by the Ghibellines of Provenzano Salvani; the original palace had battlements, necessary for the offensive and defense actions that were frequent in that historical period.

The facade of today’s building is composed of two distanced floors (separated by stone cord motives which open on to ten elegant biform windows finished with three-eyed ogival arches) and completed with an imposing and massive central doorway. The inner rooms are now offices of the Cassa di Risparmio di Firenze where some of the sculptures and stonework recuperated during the restructuring are displayed. In front of the building is an antique column crowned with a tin sculpture of a wolf by Domenico Arrighetti. 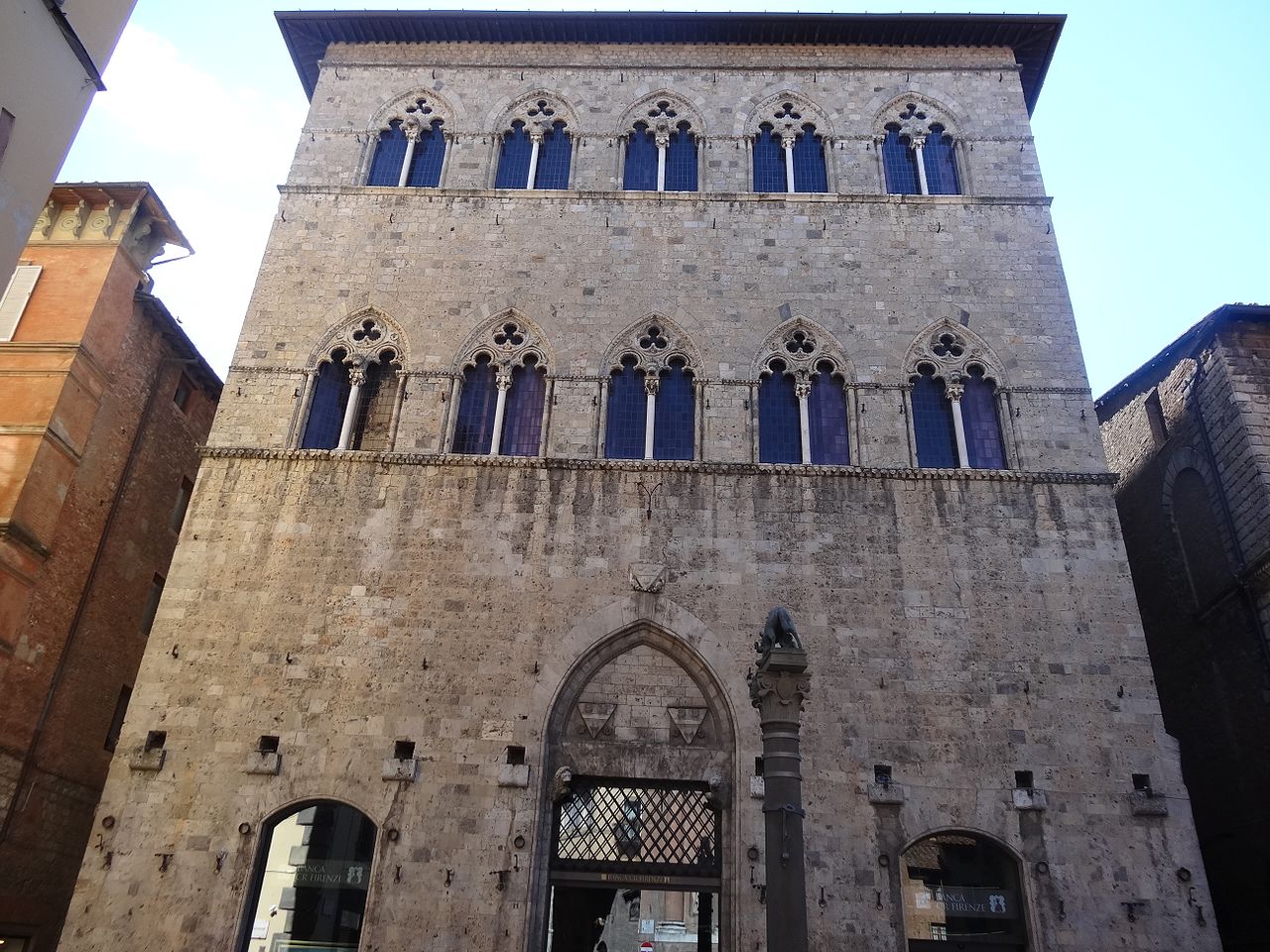 About the historical episodes related to this palace, in 1270 the Tolomei returned to Siena and took revenge on the Salvani, razing their castle to the ground, which overlooked the square in front of San Cristoforo.

About San Cristoforo, did you know that the Tolomei square was once called Platea Sancti Christophori? 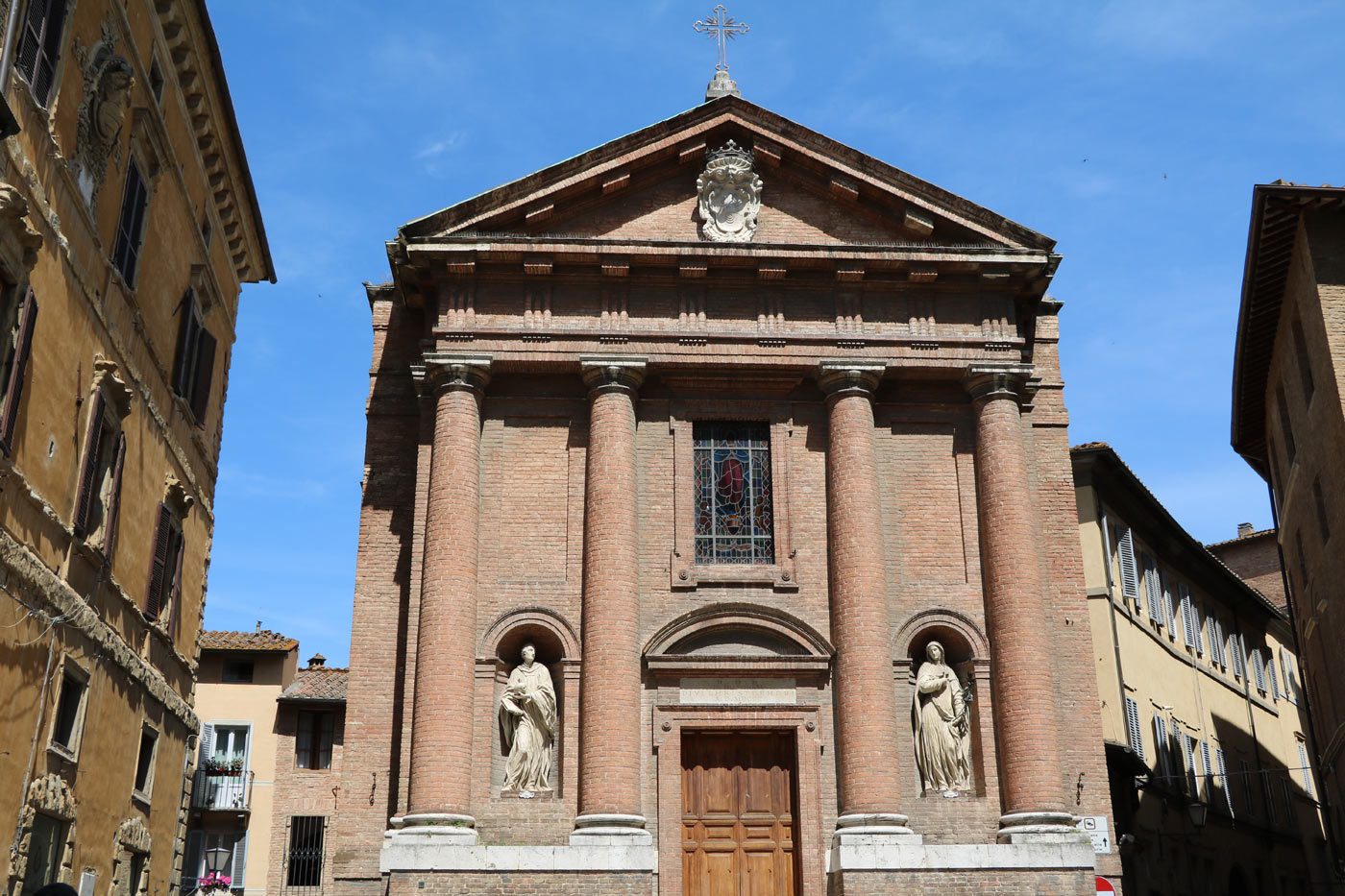 This area did not exactly coincide with the current Tolomei square, in fact, its urban layout was substantially different, because the church of San Cristoforo was much bigger than today, reaching out towards the Tolomei palace by about 5 meters. The church of Romanesque origin is characterized by an elegant neoclassical facade, moreover, from 1796 to 1945 it was also the seat of the Contrada Priora della Civetta, which now has the Church of Sant’Antonio di Padova as its oratory. 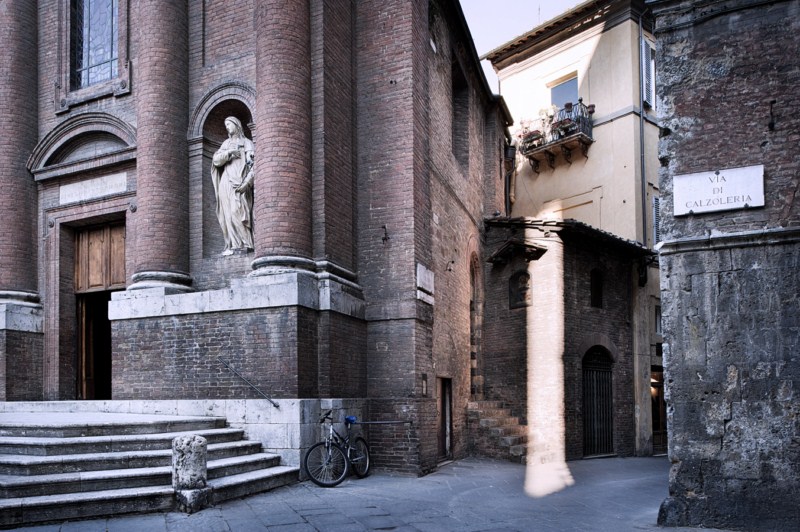 There is a curious anecdote about Palazzo Tolomei: Pia dei Tolomei, mentioned by Dante in the V cantica del Purgatorio, perhaps lived just in this palace and used to look out from its beautiful Gothic mullioned windows. The groom was Nello Pannocchieschi (the Lord of the Castello di Pietra in Maremma), who would have relegated her to Maremma and killed her by throwing her out of the castle window, then later he would marry again.

The coat of arms of the Tolomei family is blue with a silver band, accompanied by three upright crescents, two on the head and one on the tip.

According to a legend, disclosed by those who took care of the genealogy of the family, the Tolomei seem to descend from the rulers of Egypt, they arrived in medieval Italy following Charlemagne. They settled immediately in the Sienese territory, accumulated huge fortunes and soon became part of the wehiest banker families. The family owned numerous towers and castles in Montagnola and Maremma, as well as houses, churches and towers in Siena.

To explain the relevance of the square and Palazzo Tolomei, we borrow the words of André Pératè, who said that “The Tolomei square, increasingly lively and noisy, was, before the construction of Palazzo Pubblico, the center of the political life of Siena „.

Vorheriger Artikel
What are the best clothing stores in Siena
Nächster Artikel
Basilica dell'Osservanza, a XV century jewel in Siena