What to see in Val d’Arbia: the most beautiful hamlets and landscapes

Scrollen
Home > News > What to see in Val d’Arbia: the most beautiful hamlets and landscapes
Postata il: 18 April 2017

You may have already heard of Val d’Arbia hough you haven’t been there; it is a valley which is named after the river Arbia, is located south of Siena and is mentioned in Dante’s Divine Comedy because of the Montaperti battle.
This valley is characterized by the Crete Senesi (which we described in the post Exploring Crete Senesi, the badlands of Tuscany), by charming hamlets such as Asciano. Buonconvento, Rapolano Terme, Monteroni d’Arbia and San Giovanni d’Asso, each with its own attractions and worth a visit.

Furthermore, the Val d’Arbia is also a production area of fine white wines, by virtue of the peculiar characteristics of the vineyards, from which originate the Trebbiano Toscano, white Malvasia and Chardonnay grapes.
The wines of the Val d’Arbia are appropriate for white meat or fish based menus with delicate flavors, a combination that we suggest you to taste during your excursion through the hills of Siena.

How to explore Val d’Arbia 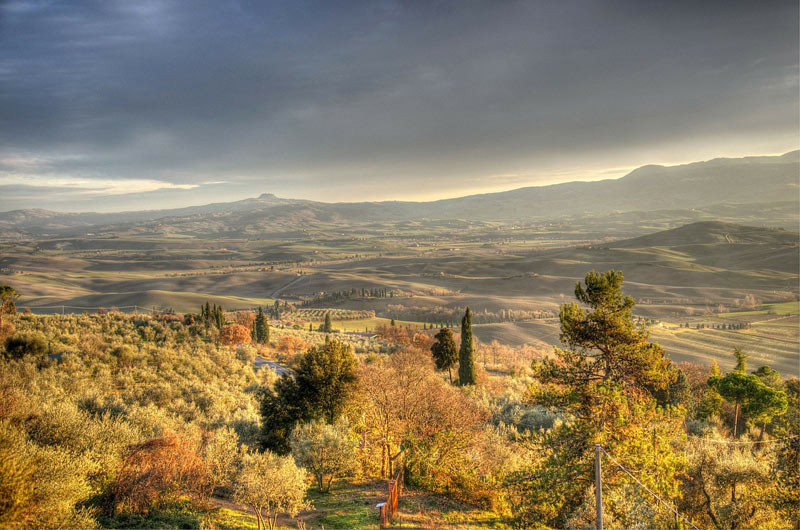 Among the itineraries that we recommend to tourists who want to explore the Sienese hinterland, there are routes on foot or by mountain bike, as this route to Val d’Arbia, which allows you to visit some of the main towns in about 7 hours of travel.
If you want to spend a day visiting enchanting places in the province of Siena, follow this route in stages along the white roads of Crete.

In Siena you can start from Porta Romana, along the Via Francigena, the pilgrim route, on which stand the ancient places of refuge for travelers such as Santa Maria di Bellem and the leper colony called casa di San Lazzaro.

Once in Isola d’Arbia don’t miss a visit to he Romanesque church of Sant’Ilario and the fortified Cuna Grange; this was once a farm, remained intact, surrounded by the countryside, topped by towers, houses a church entitled to San Giacomo and San Cristoforo.

Monteroni d’Arbia is located 13 km away from Siena and it is a town to visit at your leisure to appreciate its distinctive character. The historic center has the typical medieval architecture, and nearby there is a water mill dated back to the XIV century, testimony to the fundamental role of these territories for the production of flour and for the sustenance of the entire area around the river Arbia.

A must see, at a short distance from Monteroni, is the Pieve di Corsano, a Romanesque church that stands out in an very beautiful setting, completely surrounded by trees. 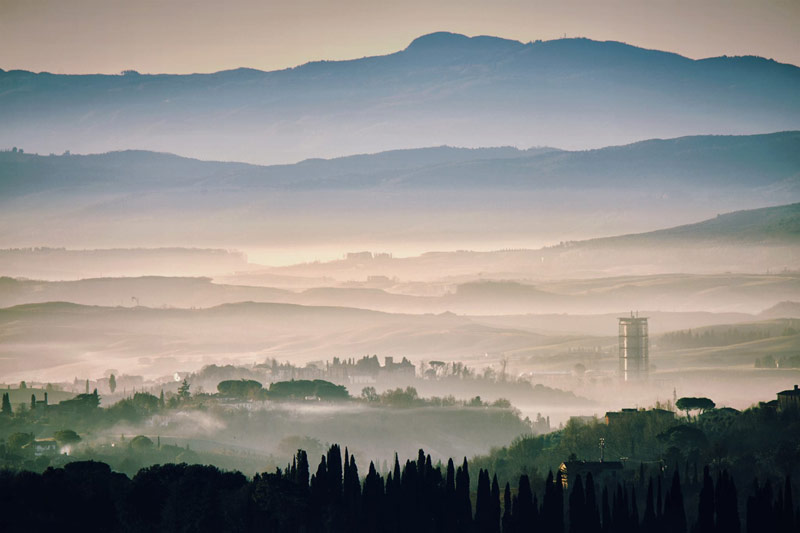 Lucignano is a part of Monteroni d’Arbia and has retained a part of the walls dating back to the XIII century, so it is a popular destination for slow tourism lovers, that in this part of Tuscany leave behind the most crowded places and are captured by the charm of long trails through the hills and the atmosphere suspended in time of stone villages.

The last stop is Ponte d’Arbia, an area that in the Middle Ages was submerged, is located halfway between Buonconvento and Monteroni d’Arbia.
From here we recommend you to go to the monastery of Monte Oliveto Maggiore, famous for its cloister frescoed by Luca Signorelli and Antonio Bazzi called Il Sodoma, one of the most significant works of the Italian Renaissance.
In just 28 km you can pass through centuries of history, traditions, wine speciies and art work different but harmoniously tied, just as the masterpieces of housed in Siena.
Mark the Val d’Arbia on the map, we are confident that you will have an unforgettable experience in Tuscan countryside.