This Senese promenade begins from the most Florentine place in the city, the Medicea Fortress, designed by the architect Lanci on request by the Grand Duke of Tuscany, Cosimo I de’ Medici, that in 1555 conquered Siena, declaring the end of the free Republic of Siena, born at the half of XIII century. 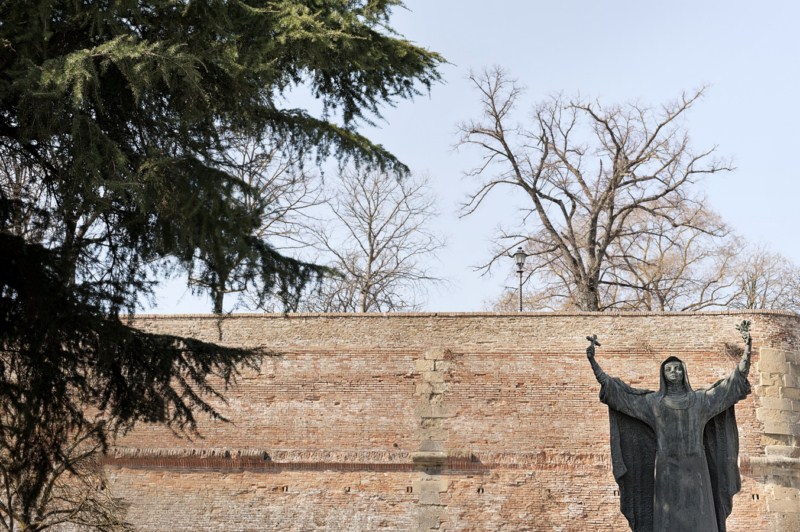 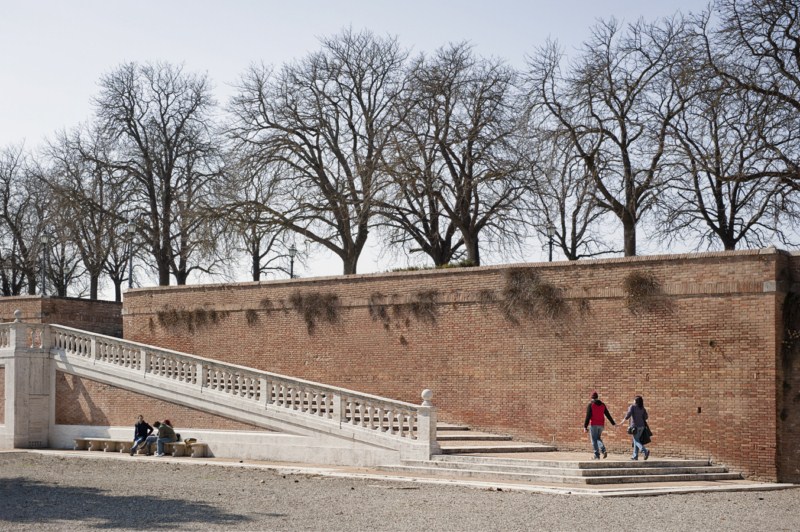 During the past the Fortress hosted the troops that controlled the rowdy inhabitants, now is the base of a Siena Jazz school and offers one of the widest views above Siena and its monuments.

From here you can reach the gothic Basilica of San Domenico, a unique building because without facade. 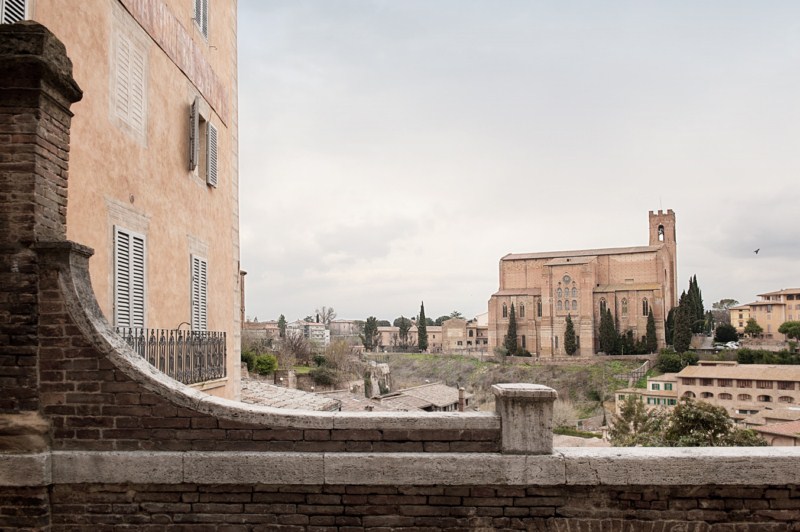 In 1907 Arthur Symons wrote “The vast Gothic structure, built of red brick, massive and imposing in its simplicity, is one of the landmarks of Siena. It is on the edge of a gulf, over against the Cathedral; and on the other side of the gulf, brown and white houses climb, roof above roof, like a cluster of rocks, grouped there naturally”. 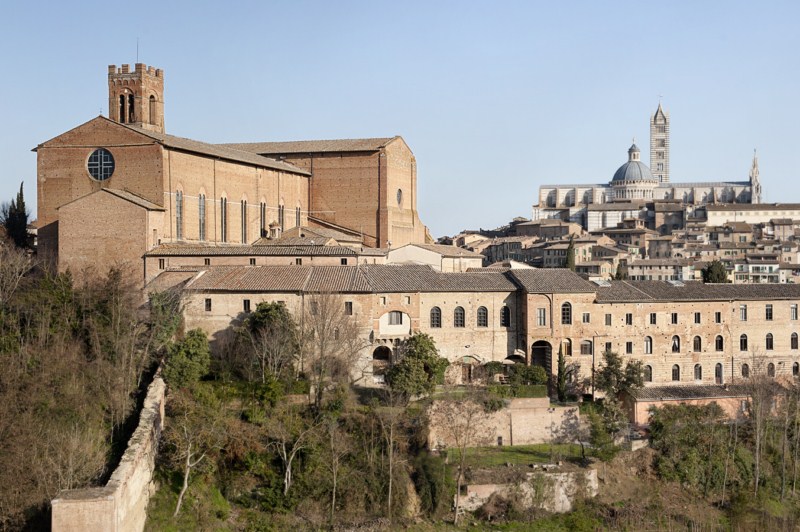 The church is one of the biggest of Siena, because is related to Santa Caterina Benincasa, Patron Saint of Europe and the only woman that is Doctor of the Church: a striking career for the daughter of a cloth dyer, that became tertiary of the Dominican Order, and whwn was 20 wrote letters to Popes and kings, becoming one of the main figures of culture and politics in XVI century. 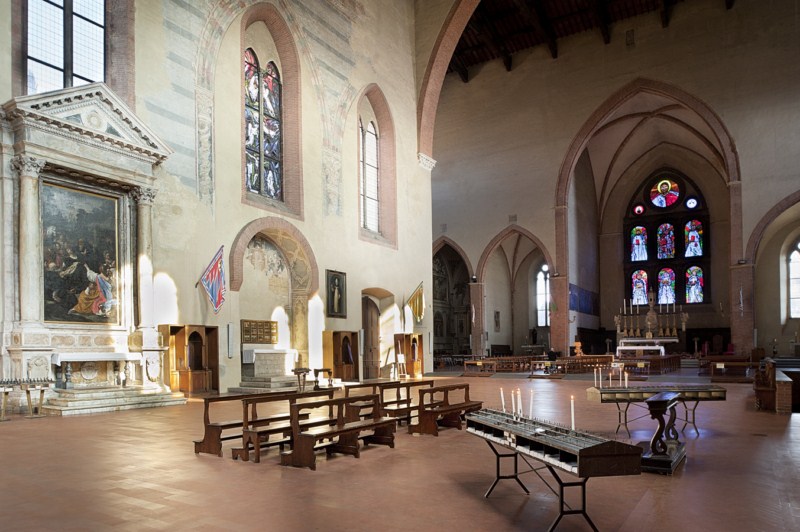 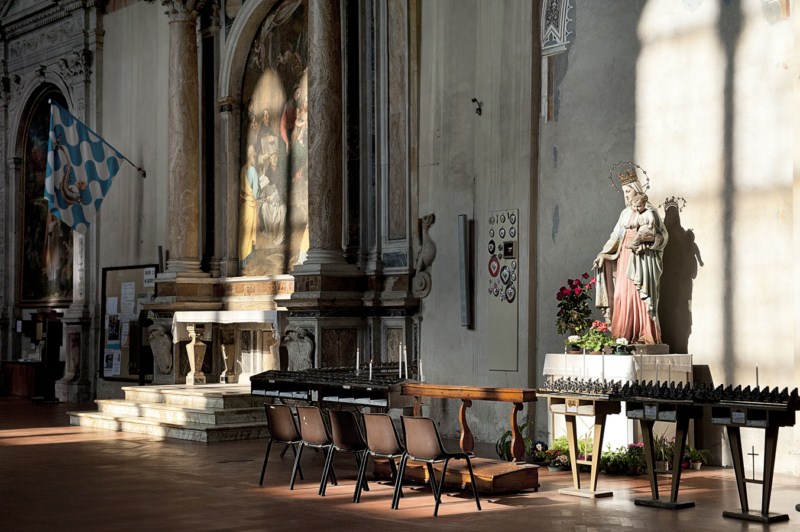 At the entrance, on the right, the Cappella delle Volte houses the most truthful portrait of the Saint, painted by his faithful follower: the painter Lippo Vanni, that portaited her at the end of the XIV century. 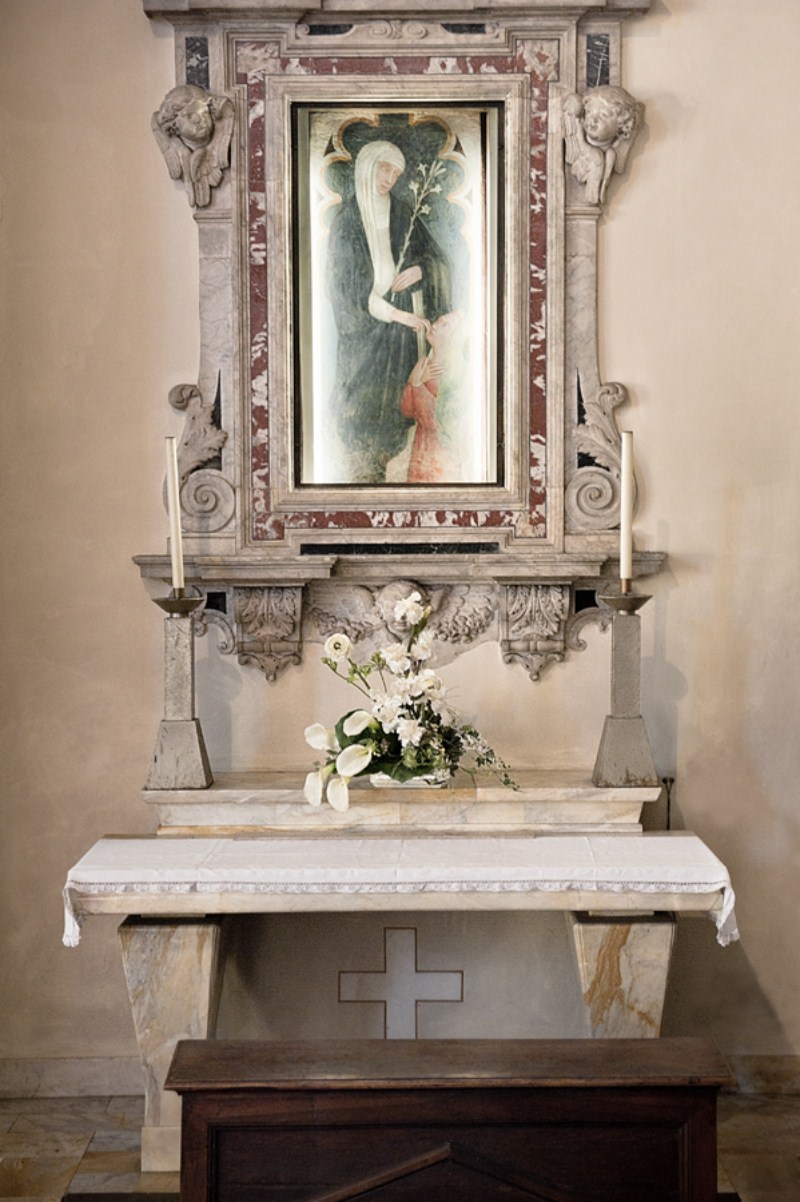 Going ahead, on the right of the nave, in the chapel dedicated to Catherine it’s possible to see the Saint’s head, encloses in an elegant golden marble tabernacle from Renaissance.
The head was carried from Rome where Catherine died in 1380.
The chapel is one of the best examples of Sienese Renaissance art: the floor, like the Duomo, is designed with marble inlays. 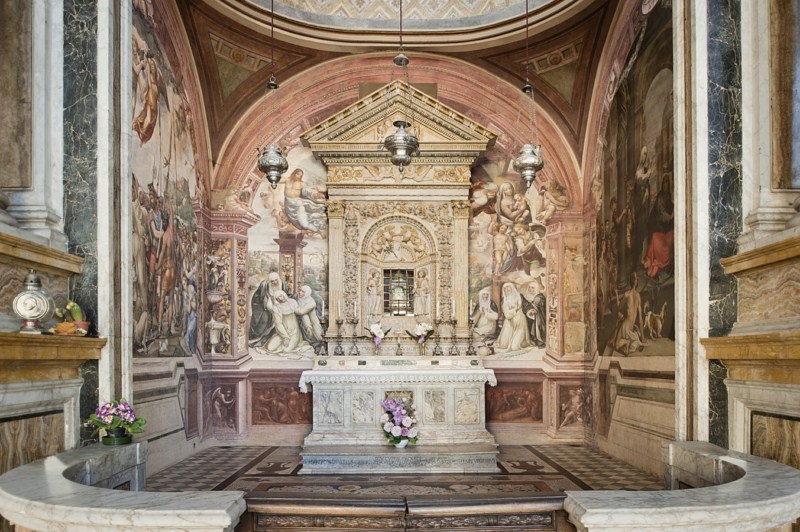 The frescos, that date back to 1526, are work of painter Bazzi, nicknamed Sodoma, and depict the stigmata of S.Catherine and the Ecstacy of the Saint, these are his masterpieces.
In 1873, Henry James noticed about these artworks: “Sodoma’s women are strangely sweet; an imaginative sense of morbid appealing attitude–as notably in the
sentimental, the pathetic, but the none the less pleasant, “Swooning of St. Catherine,” the great Sienese heroine, at San Domenico.
His frescoes have all the same almost appealing evasion of difficulty, and a kind of mild melancholy which I am inclined to think the sincerest part of them”.

Among the others important artworks of the church we mention, in a chapel at the left of the main ar, the imposing Madonna dei Domenicani by Guido da Siena, dated 1261, one of the firts examples of Senese painting.

The house where Catherine lived is located close to the basilica, on the right, walking through Camporegio street and then Tiratoio alley. 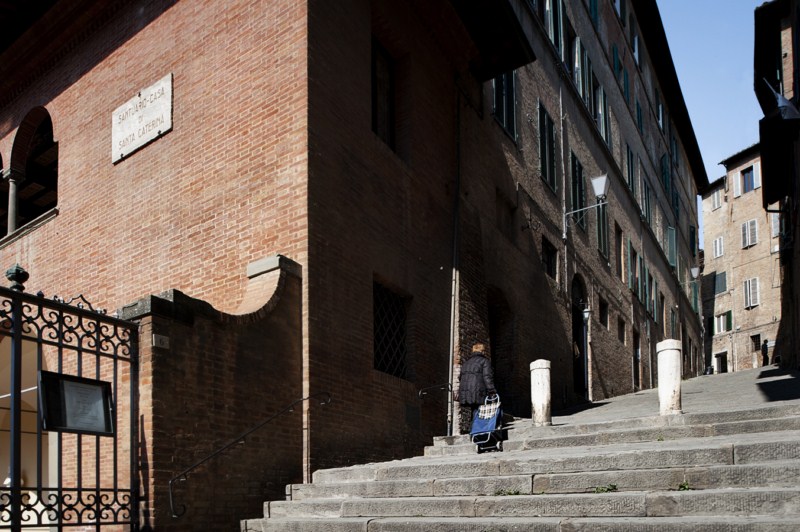 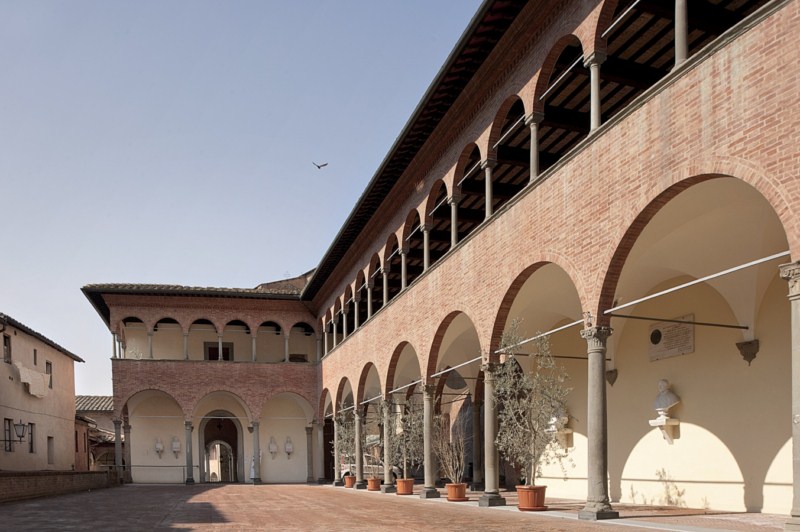 The American writer William Dean Howells said: “The arched and pillared front of St. Catherine’s house is turned toward a street on the level of Fonte Branda, but we reached it from the level above, whence we clambered down to it by a declivity that no carriage could descend. It has been converted, up stairs and down, into a number of chapels, and I suppose that the ornate facade dates from the ecclesiastic rather than the domestic occupation. Of a human home there are indeed few signs, or none, in the house; even the stop in which the old dyer, her father, worked at his trade has been turned into a chapel and enriched, like the rest, with gold and silver, gems and precious marbles”. 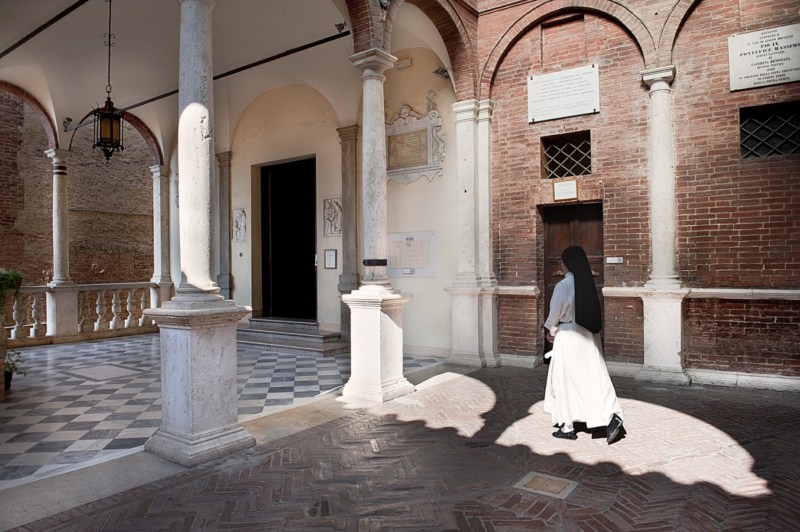 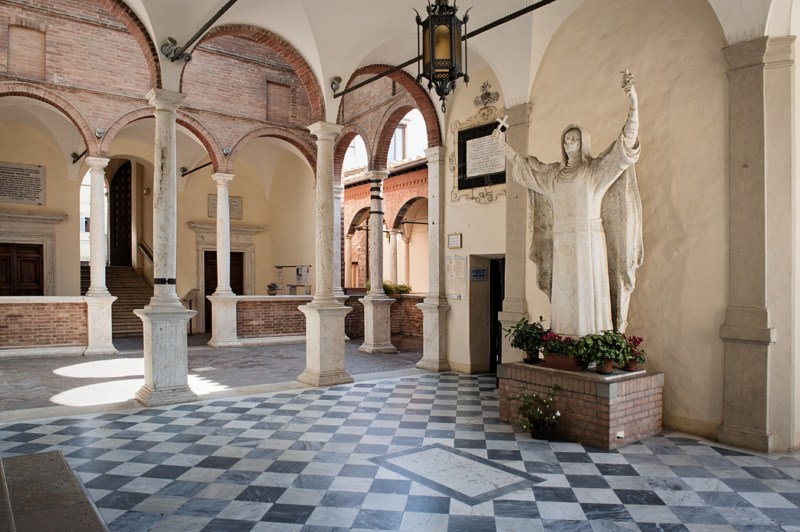 From the house of the Sienese Saint we can reach the most ancient springs of Siena, Fonte Branda, dated to XIII century. 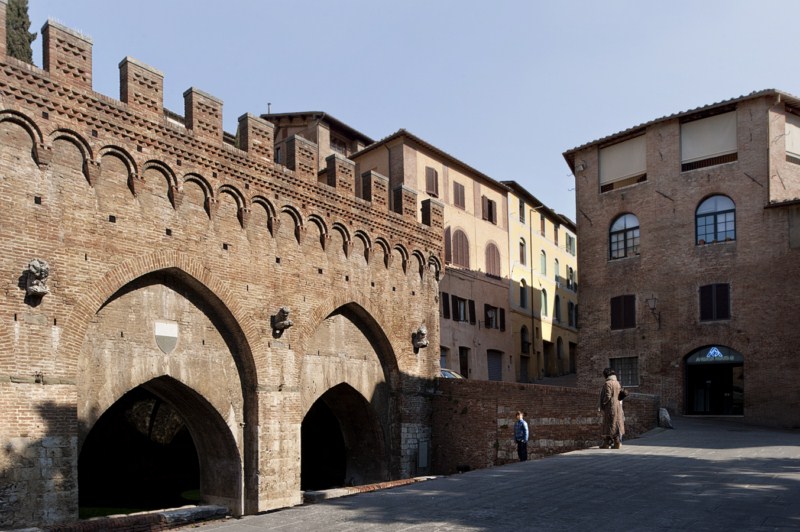 Like all the Medieval Siena springs is divided in three basins on different levels: the first basin, the cleanest, was good for drinking, the second was used for animals to drink from, the third was the washtub; the wasted water went to slaughterhouses and tanneries. 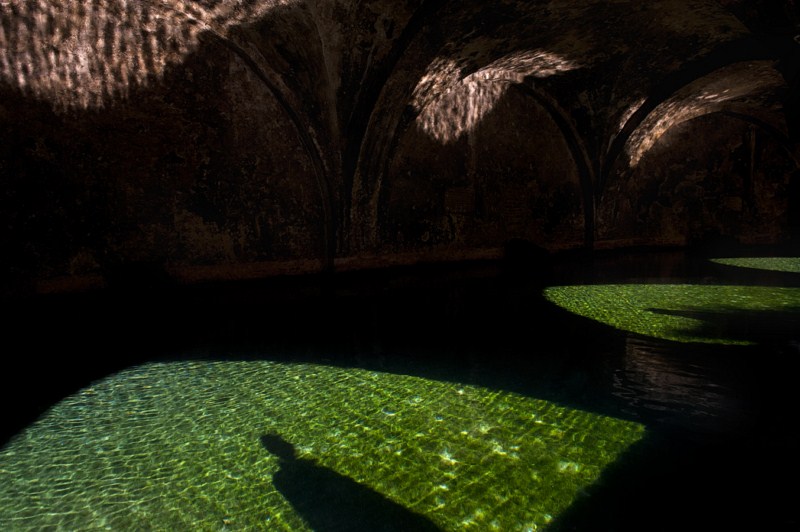 This spring was liked by the English writer John Ruskin. During his Senese stays drew the lions and in his autobiography Praeterita, leaves a nightly lyrical memory; a walk together with the friend Harvard Professor and Medieval architecture expert, Charles Eliot Norton, in 1882: ”Fonte Branda I last saw with Charles Norton, under the same arches where Dante saw it. We drank of it together, and walked together that evening in the hills above, where the fireflies among the scented thickets shone fitfully in the still undarkened air”.

During this route, Palazzo Ravizza suggest you to enjoy the plays of light in the alleys of the center and to visit a special store in via dei Termini. Here you can find very original clothes. 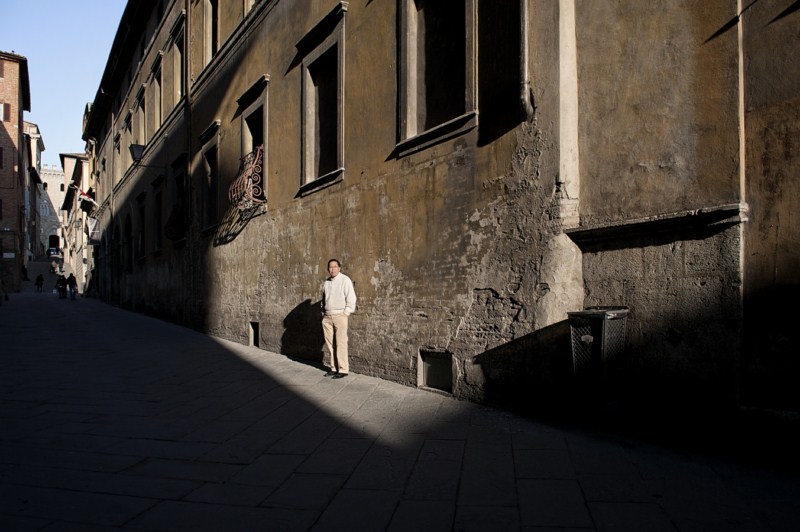 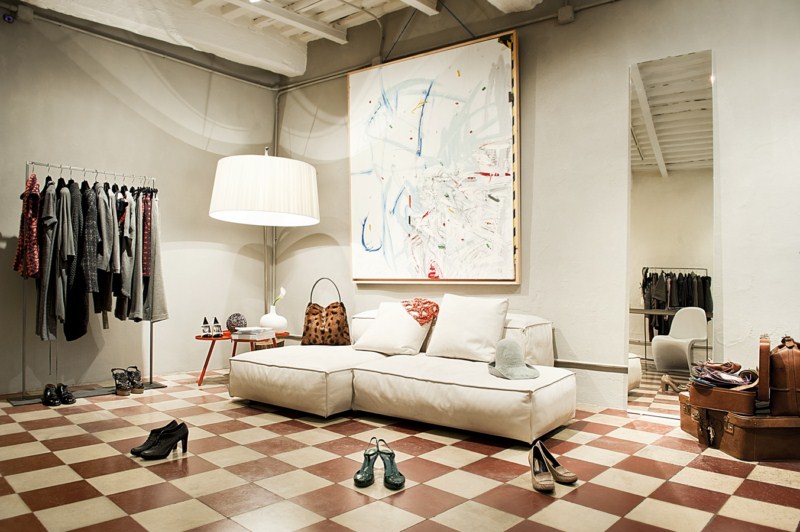