Film Festival in Siena: guide to the movies and the events

Autumn in Siena is packed with special events and interesting activities as much as summer, including a festival that became a landmark for movie buffs, the Terra di Siena Film Festival.

A few days ago, the festival program was announced: the festival will take place from 26th September to 1st October at the Pendola cinema in Via San Quirico, and at the Foreigners University of Siena, in Piazza Carlo Rosselli, for the meetings with directors and actors.
The guests of this 21st edition are very prestigious, we just mention Ornella Muti, who will be awarded the Career Award, Francesca Neri, Luisa Ranieri, Marco Bocci and the musician Mauro Pagani, to whom the Manuel De Sica Award will go. 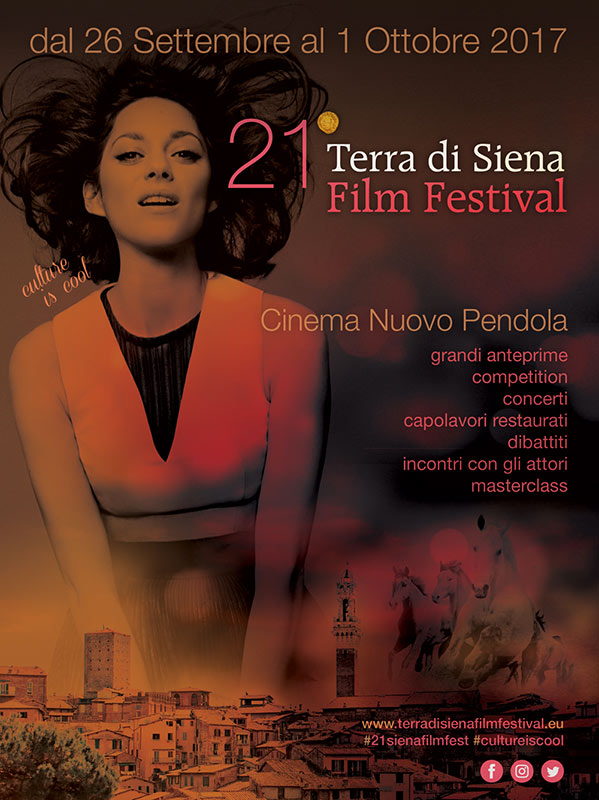 On Tuesday 26th September, the festival begins with the meeting, or rather a masterclass, with Piero Pelù and Cosimo Damiano Damato, respectively the actor and director of the short movie Tu non c’eri, wrote by Erri De Luca.
The short film will be screened at 8:30 pm, while the first movie out of competition will be Raffaele Verzillo’s Senza Fiato with Francesca Neri, scheduled after the short movie.

At 10:30 pm, we point out the horror movie Danza Macabra by Ildo Brizi, and on Wednesday 27th at 6:30 pm you can see the movie Il Velo of Maia by Elisa Rocchetti.
On Thursday 28th there will be the meeting with Giancarlo Governi who presents his book on Totò: during the release of the book will be screened rare sequences of Neapolitan actor’s films.
At 6:30 pm on Thursday will be screened the film Nobili Bugie by Antonio Pisu with Claudia Cardinale; on Friday 29th we recommend the film Tulips of Dutch director Mike Van Diem, scheduled at 8:30 pm, while Saturday 30th there will be the documentary about the Palio girl, Rosanna Bonelli, screened at 5:30 pm, an event not to be missed even for the presence of Bonelli.
Saturday from 7:00 pm onwards will take place the award ceremony at the Chigiana Academy in Via di Città 89, an acknowledgment to of Mauro Pagani, a very important artist for the history of Italian music.

On Sunday 1st October, the conclusion is entrusted to previews and special events: the premiere of the movie about the life of Chantal Akerman, director and screenwriter disappeared in 2015, a tribute to the president of the jury Roberta Torre with his famous film Tano da morire, Le Fantomes d’Ismael, new movie by Arnaud Desplechin with Marion Cotillard.

The film that will win the festival will be awarded the ‘Sanese d’oro’, and during all evenings, all guests will come out on Green Carpet, a symbol of the environmental commitment of the Terra di Siena Film Fest.

Take the chance of this great event to stay in Siena, a natural and inimitable set.

Artículo Anterior
Cycling in Siena: how to explore the town by bike
Próximo Artículo
San Galgano Abbey and the charming Chiusdino hamlet