Stories from the Palio: the origins of Contrada of Valdimontone

Scrollen
Home > News > Stories from the Palio: the origins of Contrada of Valdimontone
Postata il: 27 Juli 2017

There is a Contrada whose name isn’t apparently derived from an animal, has not changed over the centuries and is strongly linked to the territory where it was born: this Contrada is Valdimontone (Valley of the Ram), one of the ten participants in the next Palio edition, on 16th August 2017.
The origins of Valley of the Ram are wrapped in legend, as there are 4 theories related to the name: it could be derived from Montorio or Montonio, a Roman centurion who was sent by Romulus to Siena to capture his two rebellious nephews, Senio and Ascanio, founders of Siena.
Another theory refers to the presence of shepherds with many flocks of sheep grazing in the fertile valley that gives the name to Valdimontone, while, according to other sources, the name comes from Castello de Montone, where the forefather of the noble Sienese family of Montone Piccolomini lived.

The fourth theory states that the name comes from „Mons Magnum“, the name of the hill on which the Contrada extends, and is the most likely origin since it is also attested by a document dating back to 1205.
The Contrada di Valdimontone is part of the Terzo di San Martino (for further info about the Terzi of Siena, we refer you to the post How to visit Siena by exploring the Terzi  and corresponds to the area delimited by Via di Valdimontone, via Roma, via di Porta Giustizia , Via del Sole, part of Via Pagliaresi, part of via Pantaneto, Via San Girolamo, Via delle Cantine, Via dei Servi, Via San Clemente, Piazza Alessandro Manzoni and Pulcetino alley. From here passes the Via Francigena, the route followed by pilgrims from all over the world, an itinerary that became the favorite choice by slow tourists in the last years. 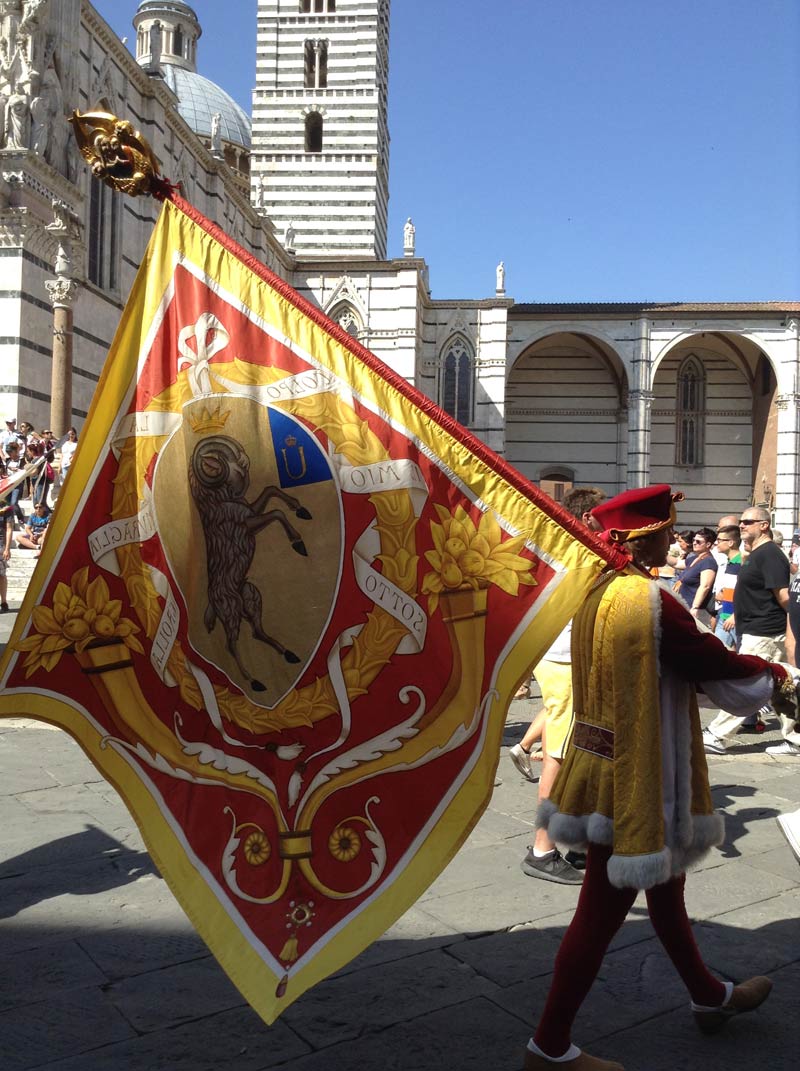 Things to know about Valdimontone

This Contrada won 44 Palios, the last time was in 2012 with the jockey Jonatan Bartoletti, nicknamed Scompiglio, on horseback to Lo Specialista (Bartoletti is the same jockey who won the Palio on 2nd July 2017, running for the Giraffe Contrada) and was the first Contrada being officially disqualified, in 1966.

That ban was due to a series of violent episodes and the arrest of two members of Valdimontone Contrada who had pursued the starter Cappelli (the starter, named mossiere in Italian, is a sort of judge who, lowering the canape, starts the race of the horses and decides whether race is valid).
The Palio on 17th August 1966, postponed due to the violent controversy, was won by Antonio Trinetti called Canapetta for the Contrada of the Snail.

About the territory of the Contrada, it’s useful to know that its museum is located in Via Valdimontone 6, the patron saint is Maria Santissima del Buon Consiglio and its church is dedicated to the Santissima Trinità and is next to the Basilica of Santa Maria dei Servi. Inside the church you can admire frescoes from the XVI and XVII centuries (made by the Sienese artists Nasini, Salimbeni and Casolani).

The Contrada Coat of Arms depicts a rampant sheep (the animal with which the Contrada is identified) on a golden field surmounted by a ducal crown and with a U letter on the upper left, surmounted by the Royal Crown.
The official colors are red and yellow with white trim, however, in the Palio racing, the jockey dresses pink jumper and trousers with white and yellow threads to stand out from that of the Snail. 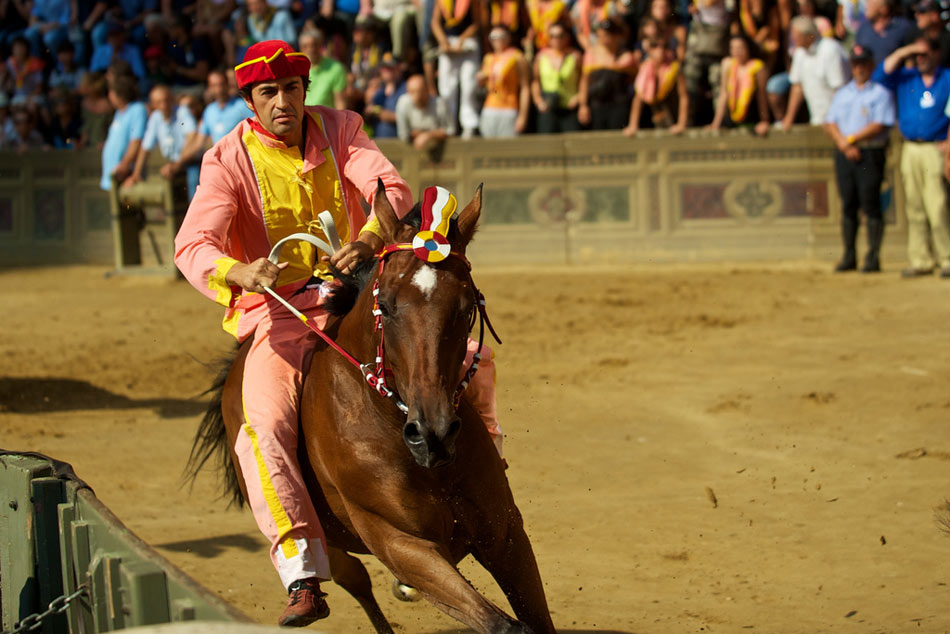 Rivalries are a common trait for all the Contrada, in this case the only one is acclaimed with Nicchio, dating back to the XVIII century but officially declared only in 1952.
This is one of the most glowing rivalries in Siena, witnessed by clashes between jockeys during and after the Palio, as happened on 17th August 2015.

Other interesting things to know about Valdimontone: their motto is “Sotto il mio colpo la muraglia crolla” (Under my blow the wall collapses), referring to the power of the battering ram, and the name of the Contrada’s magazine „Pochi ma boni“, where you can find all the news about upcoming events.
Valdimontone’s official site is www.valdimontone.it, we suggest you check it to arrange a visit to the Contrada Museum and get in touch with the tradition of the Palio, the most important for Sienese people.