Christmas in Siena, a town full of events

As every year, the town of Palio invites tourists and inhabitants to celebrate Christmas by attending events scheduled from early December until 31st January, 150 events to spend with peacefulness and joy this period.

We think it is useful to have a guide to choose your own favorite events, so we have prepared a selection of continuing appointments expected in the coming weeks, ranging from art, culture, performances, shopping and food.

About the Christmas classics in Siena, we suggest the comeback of Christmas Village at the Giardini La Lizza, the ice skating rink for kids and adults, open daily and provided with a refreshment bar, which we recommend to those who want fun outdoors. Who likes art can go to many exhibitions in different areas of the town, not only in museums.

For example, the exhibition of paintings «Manumissio: armed art» by Mauro Pellizzi is hosted by the bookshop at Via dell’Einaudito Pantaneto n. 66, admission is free and the exhibition is open from Monday to Saturday; the exhibition dedicated to the poets Mario Luzi and Alessandro Parronchi at the Museum Santa Maria della Scala is really interesting, because is designed to remember the importance of two intellectuals of the 20th century through their works from collections and archives; the entrance fee includes a visit to the Museum, a good opportunity to visit also the Duomo and admire the venues never before open to the public. 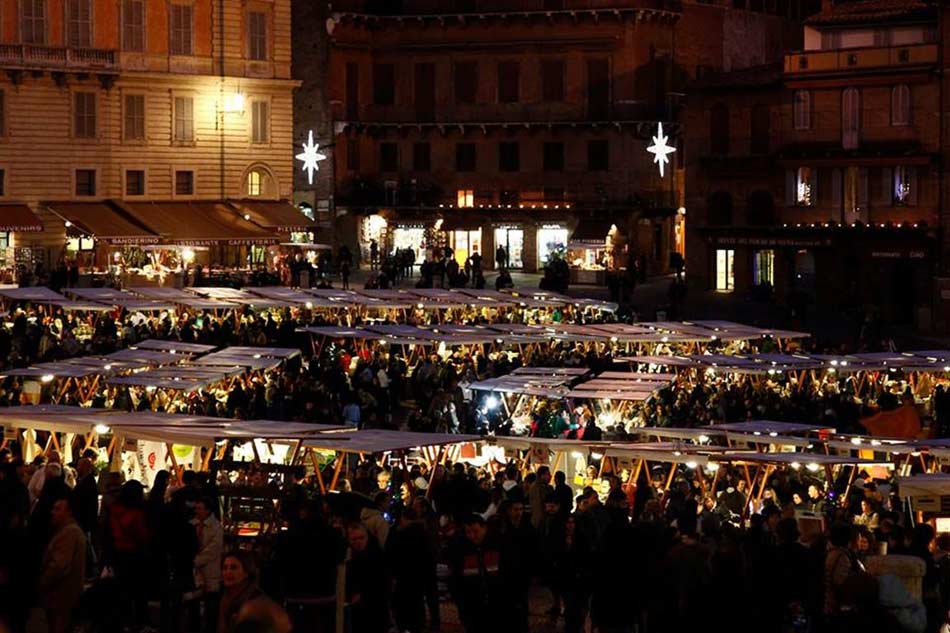 The so-called Gate of Heaven is the top of the Siena Cathedral, opened to the public only by reservation; thanks to the success of the initiative, which gives visitors the beautiful views in and out of the Cathedral, the guided tour will be available until 6th January; we recommend to immediately call the number 0577 286 300 to book a place and don’t miss this opportunity.

The tradition of the Manger is very popular throughout Italy and Siena is no exception: during Christmas holidays you will see different kinds of mangers, like the medieval one by Ivan Dimitrov exposed in the Courtyard of the Podestà, a collection of 50 sculptures in terracotta which includes 17 riders representing the 17 districts of Siena.

At the railway station there is the manger with a XVIII-XIX century style, which includes many characters who perform the ancient crafts and over 400 effects including lights, sounds and movements that make it a very impressive set.
In the atrium of Misericordia di Siena, at Via del Porrione, is set up a nativity scene made up of volunteers and accompanied by the Christmas Tree of Solidarity, made to collect food for needy people.

If you are interested in visiting a store different from the usual, the bottega dei sapori e dei saperi di Libera Terra is a must: is a shop selling the products coming from land confiscated from the mafia in the various regions of Italy, a way to enjoy the culinary delights, result of the work of social cooperatives engaged in the protection and promotion of lawfulness as a value.

From 20th December the Botanical Garden dresses up and all the guided tours will be devoted to Christmas, in the sense of traditions linked to the plants (mistletoe, holly, moss, butcher’s broom and fir) that are traditionally used as decorations.
Tours depart every hour from 10:00 am, for information please call 335 7371186 or send an email to ortobotanico@proeco.it.

If the typical menu of Siena isn’t enough and you would like to learn how to cook it, until 31st January, you can book a cooking class at the International Chef Academy of Tuscany, at Via Lippo Memmi, where you will discover all the secrets of the preparation of Ricciarelli, Cantucci and Senese dishes, a tasty experience to tell your friends. If you want to book a cocking class, call the phone number 0577 280 121.
This is just an overview of what offers Siena in December and January, you’ll find more information here: www.comune.siena.it.
Be prepared to spend a Christmas of pure emotion in Siena!