Among the many destinations in province of Siena, Radicofani is a town that has kept its austere and imposing appearance due to its position, set on a hill at 900 meters above sea level, and to the Rocca, built in the XIII century, which overlooks the entire Val d’Orcia and has become the seat of the Cassero Museum, distributed on three floors and characterized by archaeological finds dating back to the Bronze Age.

Visit Radicofani is an experience that we recommend to anyone who wants to discover the hamlets that best represent the province of Siena, a treasure chest of iridescent colors and eternal charm.
Before starting the tour of this town, it’s essential to know the story of Ghino di Tacco, whose statue stands in the gardens of Piazza Sant’Agata in memory of the gesture of this outlaw gentleman.
Ghino was an exponent of the Ghibelline nobility of the Val di Chiana, who opposed the power of the Municipality of Siena, which was part of the Guelph front.
When Ghino’s father and uncle were captured and decapitated in Piazza del Campo in Siena, Ghino managed to escape and became an outlaw.
In 1297 he completed the challenge that tied his destiny to this town: he conquered the Rocca di Radicofani, until then under the pontifical rule. 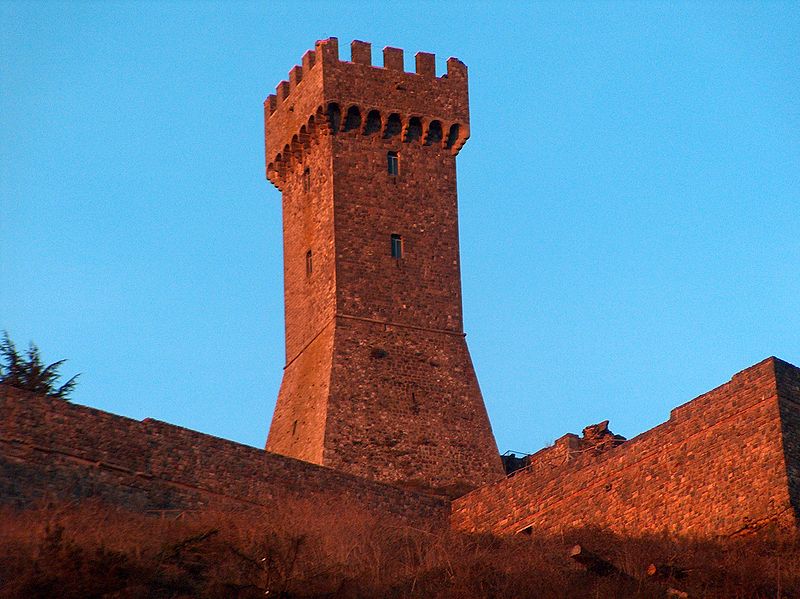 Due to the position of the Rocca, Ghino di Tacco could control the passage of goods and people from the Val d’Orcia to Rome, since Radicofani was a stage of the route. According to the legend, Ghino robbed only the richest travelers, so today it could be considered a sort of Robin Hood.

Beyond the legends and historical facts, Radicofani is unbowed and far from the beaten paths, hough every year there is a Medieval Festival celebrated here in mid-July. This is even a historical reenactment that recalls the mood of an era whose protagonists were knights, ladies, jugglers,and flag-flyers.

What to see in the historic center of Radicofani

In the main square of the hamlet you should visit the Romanesque Church of San Pietro, which has the peculiarity of being built in volcanic stone around the XI century and houses inside works of art by Andrea della Robbia’s pupils and a Madonna with Child, a polychrome wood statue attributed to Francesco di Valdambrino. This church was damaged during World War II and restored in 1946.

In the gardens of Maccione, in front of the church, there is the statue of Ghino di Tacco, symbol of the hamlet together with the Rocca.

Palazzo Pretorio, that today is the headquarters of the municipal offices, reports on the facade the coats of arms of the Captains of Justice, the Coat of Arms and the Sienese Balzana (to know more about the Balzana, you can read the post Siena coat of arms and symbols) and is located in a square once called Piazza del Palazzo, at the top of the street of Borgo Maggiore.

About historic buildings, we recoomend a stop at the Casale della Posta, a Medicean villa used by Emperor Ferdinando I as a hunting lodge, later became a home for travelers such as Casanova, Stendhal, Goethe and Charles Dickens, who described Radicofani in his book Pictures of Italy.
This villa is close to the center and ist is literally framed by two rows of cypresses.

Not everyone knows that Radicofani is also the townof fountains: you can admire one fountain on the other side of the street over Casale della Posta, the XVII century stone fountain bearing the Medici coat of arms, the Fonte Grande along the Via Francigena, dating back to XIII century, the Cappuccini Fountain, dating to XVI century, and the Antese Fountain.

The last stop we suggest is the Bosco Isabella, designed in typical English style of the late XIX century, a perfect retreat for those who chose to spend a romantic holiday in Tuscany. The name of the garden is a dedication of Odoardo Luchini to his wife Isabella, for whom he designed this beautiful corner of quietness and refinement not far from the center of Radicofani.

Spending a day in this hamlet, about 70 km from Siena, is a good reason to explore the whole Val d’Orcia, finding in every place a fragment of a special mosaic called Tuscany, a destination that is unrivaled in the world. 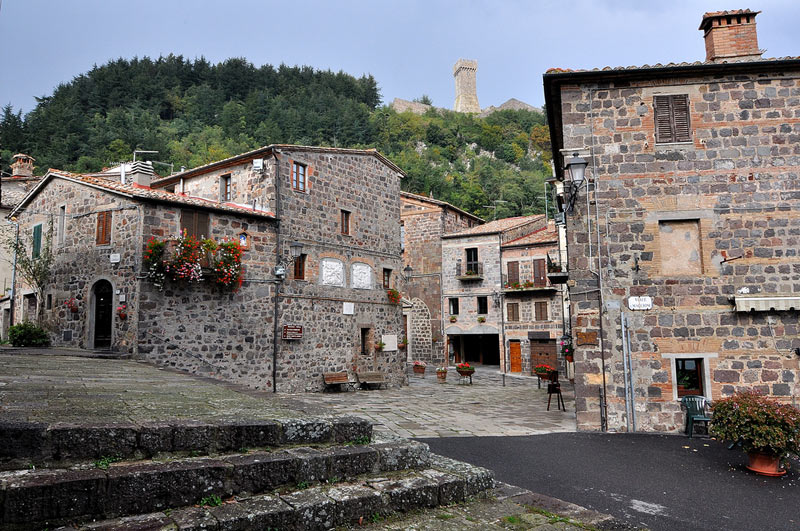 Article Précédent
Sienese typical dishes that you should taste in Summer
Article Suivant
Stories from the Palio: the origins of Contrada of Valdimontone