Visit to Abbadia San Salvatore, the town of torchlights

The destination that we recommend in this article owes its name to an Abbey of Benedictine monks that was built in 750 on the Sienese side of Monte Amiata; today there are only the church, part of the walls and the crypt as remains of the Abbey.
This place is Abbadia San Salvatore, located about 77 km from Siena, an hamlet that has become, between XIX and XX century, an important center due to its mercury and cinnabar mines, later abandoned and retrained as a mining museum.

This time of year is ideal for visiting Abbadia, because on December 8th the Christmas festivities begin and the hamlet becomes the Town of torchlights.
This nickname comes from the celebration held on the night of December 24th, when wood pyre up to seven meters high are set up, the Cerimonia di Accensione starts with the “Blessing of Fire”, the band plays Christmas carols and the torch in front of the Town Hall is lit with “sacred fire”.
Then begins a parade along the historic center, which a lot of torchlights in each street of the town, creating an evocative show that seems to belong to another era. 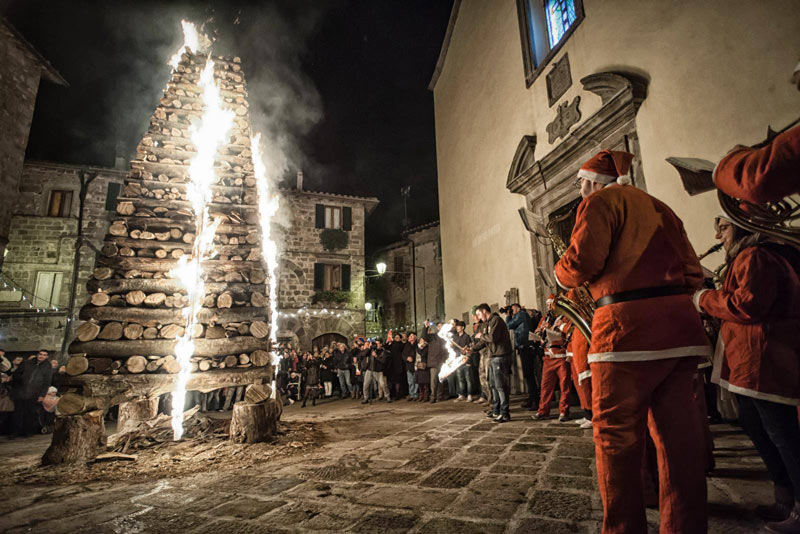 What to see in Abbadia San Salvatore 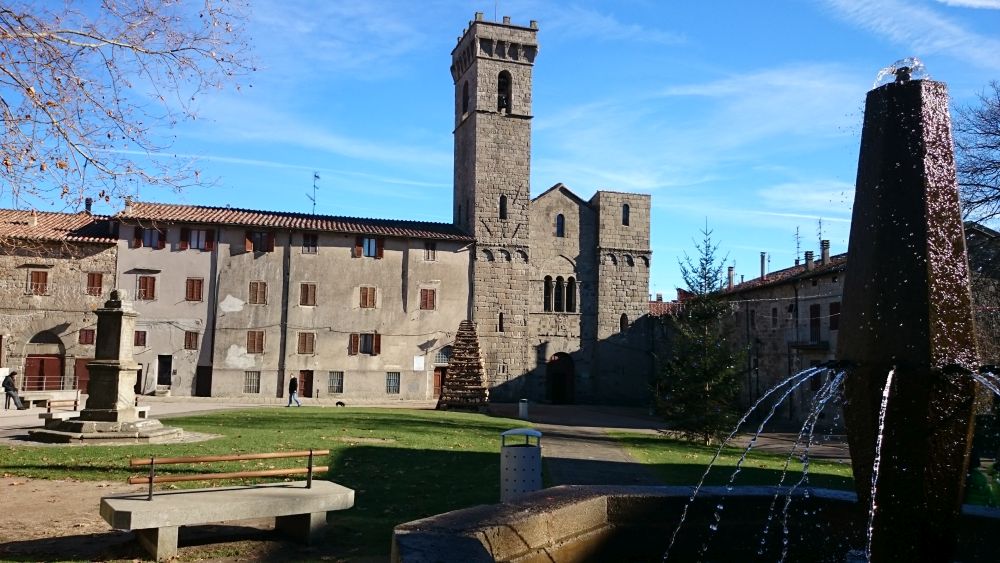 From Porta Castello you can reach the heart of the hamlet, where you can enjoy beautiful views of Mount Amiata from the top.
This part of the town, called Castellina, is characterized by oldest palaces, while the part called Castello dates back to XIII century and is crossed by three streets, where you can see the churches of Santa Croce (1221, restored in the XIX century) and Sant’Angelo (dating back to 1313).
Beyond the first circle of walls, there are the Church of San Leonardo, the Church of the Madonna dei Remedi and the church the Madonna del Castagno, dating back to XVI century; following a dirt road we arrive at the small church of Ermeta, surrounded by the woods, and then we reach the Rupe di Dante (whose name derives from Dante Alighieri, since the profile recalls its face) and the Grotta dell’Arciere.

The Mining Museum is instead an important attraction for the recent history of the town. Here you can deepen the work and the life miners, watching the convoys used in underground tunnels, videos in the multimedia museum, following the underground trail in the gallery, now used as an environment in which are housed tools and used machinery at the time by those who worked in the mine.
Inside the Clock Tower are the rooms where excavation systems of minerals, work phases, the daily life of miners and the use of mercury over time are displayed.
To conclude the itinerary we suggest a stop at the Palazzo del Podestà, built in the XV century and located in the historic center of Abbadia.

Celebrate Christmas in the town of torchlights

f you are planning the next Christmas holidays, Abbadia is the perfect place where to spend Christmas Eve, especially if you are traveling with children.
From 6.00 pm the celebration starts with Christmas carols, which will enliven all the streets of the center and will culminate in the lighting of torches and wooden pyres, thus creating a magical and poetic atmosphere, typical of an hamlet suspended in time.
On December 25th, the kids will receive the gifts of Santa Claus, while on December 26th and 27th the Church of Santa Croce will host two musical events: the Christmas songs played by the pupils of the Abbadia primary school and the concert of the Choral G.P. da Palestrina.
On Thursday 28th and Saturday 30th December there will be the show “La signora delle camelie”, revisited from La Traviata by Giuseppe Verdi at the Cinema Teatro Amiata.

On December 31st in Abbadia you can celebrate the New Year’s Eve with a concert in Viale Roma and the “Red Pants Night” at the Club 71 disco.
The month of January will be inaugurated by the New Year’s Day Concert at the Abbey and will continue with the show of Jesus Christ Superstar at Teatro Amiata. On the day of the Epiphany (6th January) the living manger will parade from the Palazzo Comunale to the Abbey and in the cloister, where the Befana will bring gifts to all children.
We suggest you checking the website www.cittadellefiaccole.it for further details about the scheduled events.

Abbadia San Salvatore is a place that cannot miss in a tourist itinerary dedicated to the lesser known wonders around Siena.

Previous Article
What to do in Siena during Christmas holidays
Next Article
Where to eat the best Panforte in Siena?